Is this really the end for Logan?

When it comes to the death of a character, it's rare that it comes as a surprise. We usually hear about it, such in the case of Wolverine, well before the death actually occurs. We've known for some time his death was coming. We've even been wondering if he's really going to be dead and how long it'll be until he returns. That's why you have to put aside the notions we've developed for the death of comic book characters. It's not so much about the actual death of the character anymore, it's more about the journey leading up to it and the aftermath afterwards. That's what Charles Soule has been giving us.

Since losing his healing factor, Logan has changed his tactics. That works to his favor when forced to fight a threat when he's clearly outmatched. That doesn't mean he's lost his edge. With Steve McNiven's art and Justin Ponsor's, Wolverine still looks fierce. There is no fear as he's prepared to jump in and put a stop to the villain's mad scheme.

As for the ending, it's something you'll want to stop and think about. If this is truly the death of Wolverine, there's many many ways it could have played out. Some would have been more obvious than others. In some ways, it was a fitting death. I'm sure there will be some that don't approve. That's the joy of reading comics. Sometimes things happen differently than you might expect. We know the story is not over as other series will be looking at the consequences and aftermath of this moment.

This is where the thinking and digesting part comes in. There's a bit that could be said about the events of this issue but some wouldn't really fall into the category of a review. This is a story that isn't quite over just yet. Seeing the aftermath can strengthen or weaken the actual moment of death. It could be argued that this was a perfectly fitting. The desire to see him go out in a blaze of glory due to his violent past battles leaves you wanting a little more.

It feels like it's been a long time coming but DEATH OF WOLVERINE has come to an end. There's many ways this could have happened and Charles Soule gives us an interesting ending. Because of the history of the character, there's a lot to think about over what this issue means and whether or not it hits the mark that fans may have wanted. I am intrigued with the route Soule took and it should be interesting to see what the aftermath of this is for everyone close to Logan. McNiven's art is great, as usual. It's almost a little difficult to see Wolverine in this state but that's why we paid the price of the admission. Wolverine is dead. It didn't happen quite as we expected. Now we get to see what happens next. 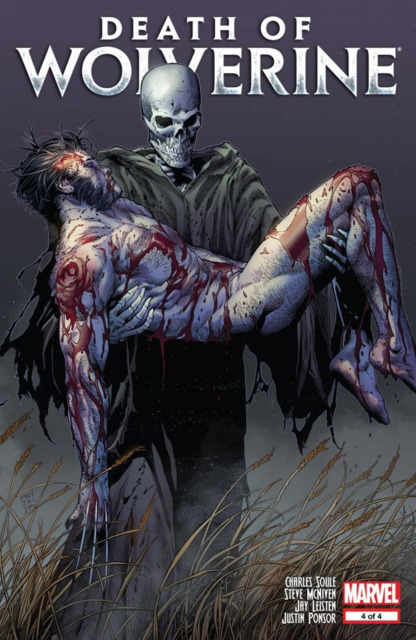