Death of Wolverine #1 - The End

Wolverine's not dead yet. But after reading this issue, he's getting a lot closer.

It feels like Wolverine's been about to die for quite some time. It was back in 2013 when the seeds were being planted about Wolverine being Killable. In his recent series, we've seen a countdown to the end. But there's still a little time left.

Charles Soule has come in to, most likely, finally put an end to Logan. While we've known that Wolverine lost his healing factor and could be killed, it felt like a lot of aspects of his condition were simply not being addressed. Most of Wolverine's appearances focused more on the fact that he could be injured versus what the lack of a healing factor means for his body. There's also the fact that if word gets out Wolverine has lost the advantage of being able to heal from wounds, his life is going to get even more difficult. It's great to see more being aspects of his condition being looked at.

Soule starts out this series with an immediate somber tone. Steve McNiven's art is perfect here. You can almost feel what Logan is going through. McNiven has the ability to make everything feel like it's on a bigger scale. How many times have we seen comic book deaths turn into events? Regardless of knowing that Logan is meant to die and that we've seen so many deaths later somehow overturned, Soule and McNiven are making it feel like it's going to matter in this story. The story is also a pretty good jumping on point. You really don't need to know what he's been up to in the past year.

The issue is also basically a Director's Cut without being billed as one. We may have a regular-sized story, we also get nine pages of page and story sketches with commentary by McNiven. If that wasn't enough, there's also a five-page interview with Wolverine creator Len Wein. If you're wondering what he thinks about the death of the character after forty years and other aspects to the creation of Wolverine, you won't want to miss it. There's even ten pages of script-to-panel.

There might be some that might not want the bonus material. Readers might not have a choice in paying an extra dollar for the material, but hopefully they'll appreciate it.

There might be some difficulty in accepting that Wolverine is really going to die or stay dead. Focusing too much on that could hamper your enjoyment of the actual story.

Wolverine made his first appearance forty years ago and now it's time for him to die. We've been reading about his coming death month after month but this final story arc starts off with a bang. Charles Soule immediately sets the perfect tone for the series and brings to light some aspects of Wolverine's condition that weren't given much attention. The story is presented in a way that newer readers can easily dive into the issue. Steve McNiven's art brings up the energy of the story, giving it an even bigger feel. Knowing that the end is finally in sight, you can't help but feel the excitement and anticipation thanks to Soule and McNiven. It should be obvious--this is a Wolverine story that should not be missed. 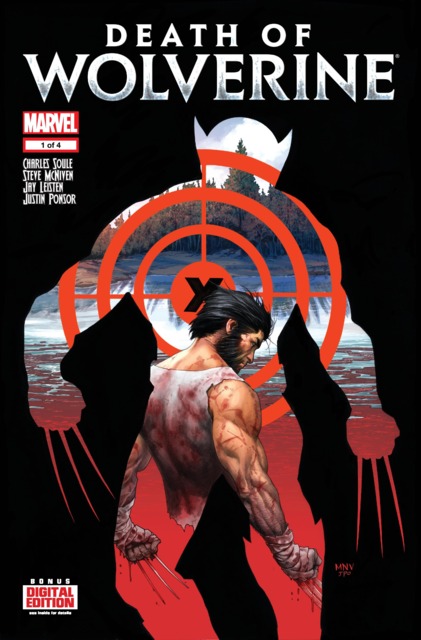