There's no denying the importance of this issue if you're reading the current series.

Often when we see other spin off titles separate from a character's main title, they tend to have a different feel to them. Deadpool is a perfect example. While some of the other comics with him have been really good and interesting, they seemingly have their own continuity and don't seem to matter to the main series that much. With DEADPOOL: THE GAUNTLET, that is absolutely not the case.

Obviously the fact that this series is written by Gerry Duggan and Brian Posehn means there will be a connection to the main DEADPOOL series. Also, it's no secret, this series will directly tie into the big wedding coming up in the main series. In fact, could this issue be where we officially meet the future Mrs. Deadpool? You'll have to read the series to find out.

As we (and Deadpool) meet Shiklah, the story takes a slight risk in slowing down a little in order to reveal her backstory. Because we don't have any prior knowledge of her, this is an important part of the story. But the action does quickly pick up as they need to catch a train and have a meet up with a certain vampire hunter.

This series has been a great example of how the Infinite Comics platform could and should be used. The format adds to an already captivating story. With this being the fourth chapter, I almost couldn't imagine reading the printed version. Reilly Brown's art gets a chance to almost come alive. This isn't a motion comic but the extra art and transitions lets the scenes play out in a more natural way that still feels like a regular comic with a little more oomph.

Each chapter has been a blast so far. Infinite comics sometimes feel as if they go buy too quickly but this one has a nice pace and there's so much to see.

Do you like Deadpool? Do you like really cool things? DEADPOOL: THE GAUNTLET is the comic you should be reading. With the Infinite Comics platform, the comic becomes even cooler than what you might dream of. Written by the DEADPOOL series writers, this series will play an essential role in the main series. Reilly Brown's art will fill you with warm feelings as we get to witness what almost feels like a coming of age moment for the Merc with a Mouth. Everyone else is reading DEADPOOL: THE GAUNTLET. Give into peer pressure and read the comic for yourself. 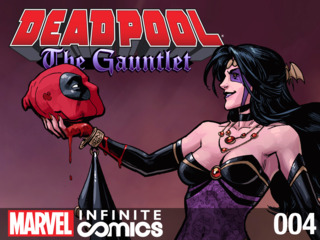