Deadpool: The Gauntlet #2 - Chapter 2: Deadpool & the Temple of Boom!

What does Dracula want with Deadpool? Find out where Deadpool goes after leaving London.

Deadpool comics on a weekly basis? Yes, please. There will be a printed version coming out but I'd imagine it's going to lose some of the charm seen in the Infinite Comics version. While it's not a full motion-comic, it adds a little more personality to the story and adds a nice bit of humor to the story. At the same time, it's not done in an over-the-top fashion that could get annoying if you're not a fan of this sort of thing.

The story picks up from last issue. Deadpool meets with Dracula and the stage is set for the next part of the story. With the idea that this is building up to that big Deadpool event taking place in April, you'll want to pay close attention to everything going on. Is there a firm connection at this point? It's an intriguing idea.

Gerry Duggan and Brian Posehn keep the humor going and this feels similar to the regular series. That's a great connection since often digital spin off comics have a different feel to them. Reilly Brown does a great job on the art, once again, as expected.

This chapter had a faster feel to it. The story is moving along but while we get a pretty cool fight scene, it felt as if the story zooms by too quickly. There is something to leaving the readers wanting more but at the same time, we're left waiting with a bit of a cliffhanger. At least we don't have to wait too long.

More Deadpool isn't always a good thing, as we've seen in the past. Thankfully this Infinite cComic highly compliments the main series. Having both written by Gerry Duggan and Brian Posehn is a great way to keep the vibe going on and making it feels like it truly matters in the grand scheme of Deadpool-goodness. Reilly Brown's art is great and the format of the Infinite Comic allows for an enhanced reading experience. Deadpool is in safe hands with Duggan and Posehn. But based on the wacky shenanigans they've come up with in the past, there's no telling what's going to happen next. 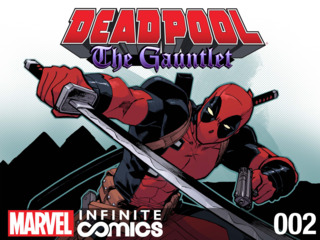