I've mentioned before that I'm a huge fan of the original Secret Wars. It came out when comics were in a different state. The big events weren't so common. There was a special feeling to it and it was exciting to see unfold. With DEADPOOL'S SECRET SECRET WARS, Cullen Bunn is taking those memories and injecting the absurdity of Deadpool. There are plenty of bizarre moments seeing the familiar scenes and moments changed and affected by Deadpool's presence is entertaining and a little disturbing, in a good way.

In a surprising twist, last issue jumped ahead in the story to a moment where, spoiler, everyone is killed. Deadpool is (almost) the only survivor but we are treated to flashbacks that will clearly lead up to this final moment. These flashbacks take the long route and throw us into other moments throughout the original twelve issue story with Deadpool doing his thing, trying to help and mostly causing more chaos.

I like Deadpool about as much as the next guy (provided that next guy does really like Deadpool). I really enjoyed the first issue but there were moments here the story started feeling a little scattered. A lack of complete cohesion may be fitting for Deadpool but it felt a little odd having the story jump around to different moments in the flashbacks. A couple of them felt completely random and didn't fit in with what Deadpool was saying in the 'present.' Seeing the different moments is what we would want and expect. Having the story jump towards the end and then randomly switch back to previous events in the timeline is just a bit jarring. Sadly, it also started making some of the jokes and moments a little tired.

Only Deadpool and Cullen Bunn could revist a past story and make it feel like this was how it happened, provided Deadpool is fully involved. Bunn has injected Deadpool into the classic and memorable Secret Wars twelve-issue series from 1984. This issue does jump around a bit giving it a disjointed feeling. That might be fitting for Deadpool, as if he were truly the one telling the story, but it also makes it feel like it's just pieced together with random moments. Matteo Lolli's art is really setting up a groove with Deadpool invading and having his way with the events in the story. Even though I was a little let down with this issue, I'm still enjoying it as I'm a sucker for the original Secret Wars. If you can stomach Deadpool's wacky shenanigans and have read the original, you'll want to see how absurd it can get. 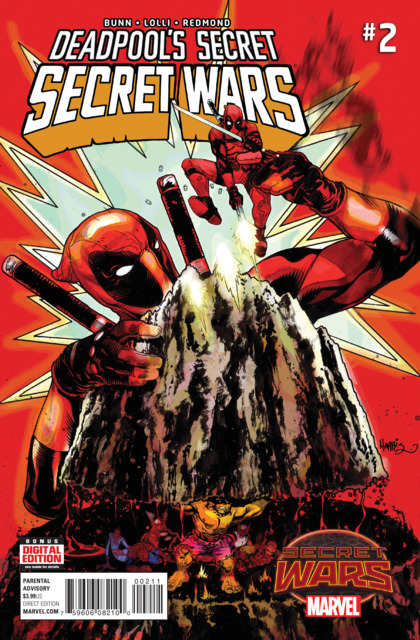