Deadpool's war against himself has now reached cosmic levels. Can even 616-Deadpool, Pandapool (the species that makes YOU endangered), Lady Deadpool and the Deadpool Watcher stand up to Galactipool?...this series sure is silly.

"What If?..." stories tend to have a bit of an ego problem when they come out. It's often interesting to see what would happen if stories played out differently than they did, but the result is almost always disastrous for all those involved, implying that if things turned out differently from how they "should" have, everything would go to absolute crap. Or they're played for laughs. Also: characters are inexplicably far more fragile and easier to kill. Cullen Bunn's "Deadpool Kills the Marvel Universe" was certainly one of the more grim of these tales with Deadpool having his playful and stupid personality traits destroyed, leaving only his homicidal madness to wreak havoc across every inch of his universe. But one universe could not slake his nihilistic thirst, nor could wiping out the progenitor stories that led to his own creation, so it must follow that, as Deadpool is the only character aware of his fictitious nature, Deadpool must also be the source of it. Thus DEADPOOL MUST DIE!

Two warring armies of Deadpools have been assembled to ensure either the destruction or salvation of all existence and last issue left us with the reveal of the ever ravenous Galactipool. Bunn's impressive tale of meta-awareness and multiverses has allowed a lot of Deadpool's trademark humor to return to what has actually been a fairly dour series (though an extremely well-written one) and the absurdity has been brought to epic levels as we see a veritable legion of different Deadpools clash. Lady Deadpool leads the charge as a Watcher that watches ONLY Deadpools breaks his vow of non-interference (cause seriously, what ELSE do Watchers do but break their vows?). Bunn has done a great job actually giving all these seemingly carbon-copy characters their own voices and personalities and even done an admirable job creating some legitimately dramatic and emotional moments.

Salva Espin and Veronica Gandini provide linework and colors in what is an extremely kinetic, bloody tale that seems to be playing to both their strengths. The action is explosive across every page, and the fluidity of the multiple mercs with many mouths is truly a sight to behold and for a book that contains such an incredible volume of red (between the costumes and the blood, it probably accounts for around 60% of all color in this issue), there's still a great palette and the imagery never becomes boring or monotonous. The tone struck by the art is just cartoonish enough, yet grounded enough, to strike the perfect harmony with the writing, which has it's own funny-yet-vicious tone that it's maintained throughout.

There's no way around it: this book is pure, hellish chaos and this issue is even more insane than most. It's difficult to keep track of exactly what's happening to whom, exactly what's causing what to happen and just where all the characters are. For instance, I can't actually remember the last time we encountered the Nihilist Deadpool that was the catalyst for this entire event. While the panels, taken on their own, are very crisp and clear, there's little-to-no continuity between them, characters flit about the battle seemingly at will and completely at random. One COULD argue that this is a choice intentionally made due to the nature of the book itself, but it doesn't enhance the enjoyment of it nor is it ever commented on by the self-aware cast.

Though it's become more a roller-coaster than a narrative, it's still one helluva ride! This book is giddy, gory meta-fun for the whole family (not actually for the whole family) and has one of the more interesting overall concepts I've seen in comics. I can't believe a one-off What if?... led to two of the most fascinating, introspective books to come out of Marvel. It's not a perfect book, it's not a perfect issue, but it's absolutely, positively worth checking out, even if you're not Deadpool's biggest fan. And if you hate Deadpool, what could be better than watching him slaughter himself over and over again? 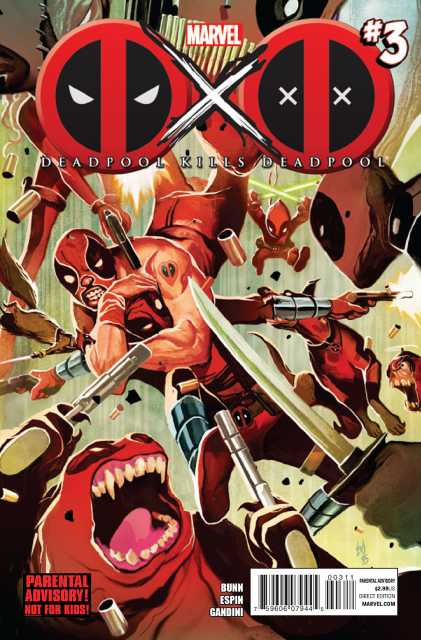