Deadpool #45 - The Aristocrats; Shiklah's Catching Up; The Family S.H.I.E.L.D.; What Do We Want? Apocalypse! When Do We Want It? Now!; The Twhipster and the Quipster Battle the Hipsters!; All About the Benjamins; Parents: The Meeting

This is the end for Deadpool.

Deadpool has been through a lot lately. There's been a fascinating balance throughout this series. We've seen moments of humor followed by some seriously dark times. Wade has also managed to get married, form new friends, and even discovered he had a daughter. It almost seemed as if everything was going great for Deadpool. Perhaps things were going a little too good for Deadpool.

For those wanting to see Deadpool cut loose, this is definitely the issue for you. When his friends and family are threatened, Deadpool unleashes his fury. We get some epic scenes. Brian Posehn, Gerry Duggan, Mike Hawthorne, Terry Pallot, and Jordie Bellaire do a phenomenal job telling this final story.

But isn't this the end for Deadpool?

We do indeed see the end of Deadpool. It did feel weird reaching the end of the story. This main story is followed by several others. We get to see different spotlight stories involving Deadpool and his supporting cast written and drawn by several creators. They do sort of feel like memorials in Deadpool's honor. If you're bummed about this being the final issue, you'll have plenty of content to make reading the end a little easier.

This is a big book. There's a lot of really good content. That also means it has a big price tag. Regular readers, especially ones with a budget or set pull list will have to pay $9.99. It's fitting for Deadpool's final issue to be a grand celebration of sorts but it also, in a way, forces readers to have to pay more. The follow up stories are good but not all felt truly necessary for the ending of this volume.

Deadpool is dead. The immediate reaction likely contains doubt and suspicion. It's not really a spoiler since it's advertised on the very cover but we do see the death of Deadpool. Brian Posehn and Gerry Duggan do a fantastic job along with the rest of the creative crew in closing out this volume. We've seen Deadpool gain many friends and family during the past 44 issues. You just might find yourself with some sad feelings. At least we get a pretty high caliber ending. The extra content by an army of talented creators helps make sadness go away but it also adds to the price. This is a massive final issue. Don't miss out on your chance to say goodbye to Deadpool and to raise a toast to a great volume. 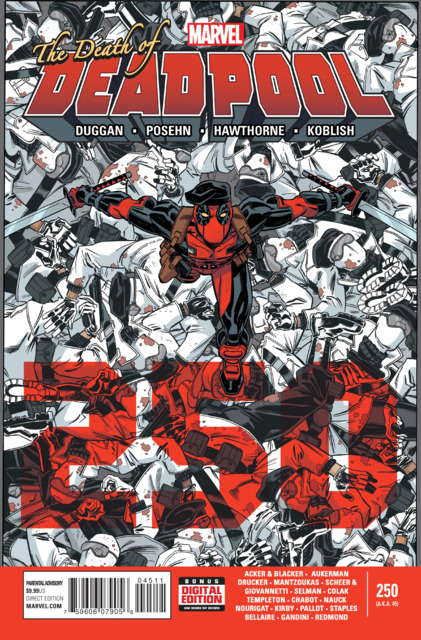