It's the final round of Omega Red vs. Deadpool. Michael will be collecting bets.

There's only one (Godzilla-sized) issue of DEADPOOL left and this issue sure does remind you about that unfortunate fact. But before Wade Wilson heads back to the United States, he needs to take care of one little problem: Omega Red. The beginning of this encounter plays out exactly how you'd expect it to -- violence that's presented in a fun and exciting instead of brutal way -- but then things take an unexpected turn, and I really do think it's for the better. We know this creative team can dish out entertaining action (see the entire first arc), but we've seen plenty of it, so in this chapter, they give us just enough before going in a totally different and way more engaging direction. It's a reminder that not every (anti-)hero vs. villain encounter needs to conclude with someone knocked out, incapacitated, or killed. They've given us plenty of laughs and madness in this story arc, but this grounded things and humanized Wade much more than I thought it would. I won't say it's as emotional or compelling as something like The Good, The Bad, The Ugly, but it proves these co-writers have what it takes to make dialogue more entertaining than guns, swords, and crazy sharp coils.

What's especially interesting is how they connect the Omega Red story with the Shiklah one. It's an effective surprise and then focuses big time on teasing her upcoming Secret Wars series. It's a little disappointing we didn't get more interaction between the two before they went their different ways, but I'm sure people looking forward to the upcoming series will love the teaser.

When a series is full of gags and over-the-top action, it really makes the more serious beats so much more impactful. Deadpool saved some people from an immediate threat, but did he really solve anything? What did he really accomplish? These questions are only briefly addressed and another development quickly steals the spotlight -- one that implies the next (and final!) issue will get hectic right away -- but it really sinks in. Deadpool's been turned into a cash cow and thrown into so many not-so-great stories over the years, yet these two writers remind me why I care about the merc. He's not a guy who's proudly taking the moral high ground and he's not someone who's okay with killing any and every problem in his path. He's a dude who's stuck in the middle and has a lot of personal issues that still impact him, even if he's tackled them head-on time and time again. (His past isn't something anyone should be able to shrug off.) Some may think he's a joke or just a Deathstroke parody, but stories like this one really give me a strong connection to the fictional guy. (Him being eager to cheat on Shiklah wasn't cool, but hey, I'd be a liar if I said it didn't make me laugh.)

When this arc started, I honestly thought Salva Espin's exaggerated and cartoon-ish style would only thrive with the comedy and craziness. Well, this one and the last issue have made me eat my words -- they're delicious. Along with Val Staples' consistently impressive coloring, DEADPOOL #44 is a bright, crisp, and enjoyably animated chapter. Whether it's bloody action or an angry proclamation, these two make sure Gerry Duggan and Brian Posehn's story looks good and they nail the right tone for each scene.

Nothing "bad" comes to mind, but you can tell a fair amount of this issue is focused on hyping up the future and while it is solid, this arc doesn't really conclude in an especially memorable way. I'm glad they avoided playing things out in a generic way with Omega Red and I enjoyed the issue a whole lot, but I can't say there was really a big standout moment and I was left kind of feeling like the objective was to quickly wrap everything up while also promoting what's next (e.g. the big finale and Shiklah's series).

DEADPOOL #44 is all about two things: buildup and character. Sure, it has some amusing violence and plenty of jokes, but what it really boils down to is it's a comic that'll hook you with a surprisingly down to earth moment between two characters and then it'll leave you thinking about what's to come. And thanks to the art team's steady dose of lovable visuals, we're never pulled out of the moment. The combination of consistently solid visuals and a strong script makes this yet another great chapter in Duggan and Posehn's run. It's too bad we only have one issue left, but at least they've created a run that'll be worth missing. In a time when Deadpool could just be a blatant cash cow, they've given the merc with a mouth a number of great stories -- stories that are definitely worth reading all over again later on. Now, we just have to wait and see whether the big finale delivers. 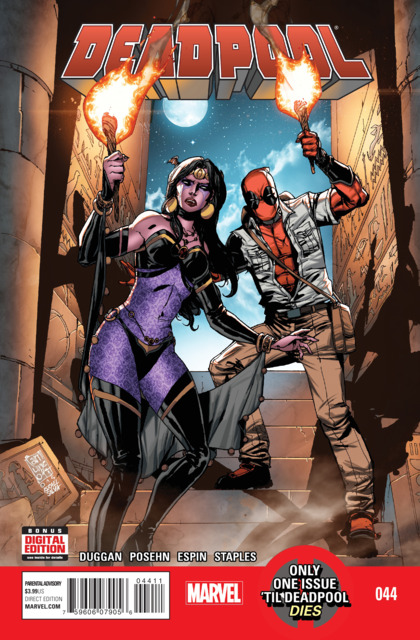