Agent Preston makes a major discovery about Deadpool's daughter. Meanwhile, the Merc with a Mouth continues his team-up with Dazzler.

So far, co-writers Gerry Duggan and Brian Posehn's latest DEADPOOL story has focused heavily on "the Mark with a Math" and Dazzler's war against vampires. There's more of that in this latest chapter, but the story finally shifts gears and gives Agent Preston's plot much more of the spotlight. This is absolutely a good thing. We've seen plenty of Wade and Dazzler have fun slaying vampires, but now we get to really delve into the more compelling material this latest story has to offer. These developments bring out a nice emotional beat and leave us with a note that has me wondering how long it'll be until I can read the next issue. It's hardly all darkness and despair, though. There's plenty of silliness to go around and there's a good laugh or two in there, as well. Preston has a ridiculously enjoyable fight scene. It's so over the top to the point that it almost feels like extremely graphic slapstick comedy.

I've previously explained why I'm not the biggest fan of artist John Lucas' unique style, but I have to give credit where it's due. He nails the wackiness and silliness of the supremely violent fight scene. He transforms what could have been a horrifying sequence into something hilarious and absurd. The last page is absolutely terrific, too. Even when I'm not all that fond of the way certain characters look, Val Staples does a consistently great job with the assorted colors. Be it a shockingly violent fight or a discussion in a peaceful backyard, the coloring helps bring it all to life and fits the tone well.

I can't help but feel like the vampire/Dazzler scenario was only there to include a loose connection to his wife and show us Deadpool's finally in a good mood right before hitting him with another dose of darkness. It's amusing, but the Preston side is way more interesting and you can't help but want to see more of it. Thankfully, this chapter is able to rectify that and it seems like the vampire element will now become secondary. I'm all for seeing how that concludes, obviously, but the dilemma over Deadpool's daughter is way more engrossing.

Lucas' eccentric and cartoon-ish style works when the wacky chaos comes front and center, but I just can't get into many of the exaggerated expressions and the way some heads are shaped. It's just not for me, unfortunately.

DEADPOOL's latest storyline finally starts heading in a more gripping direction, but co-writers Duggan and Posehn make sure we're treated to plenty of silly fun before we enter a darker atmosphere. And even when this story does begin to shift gears, it's still able to bring the occasional smile and make sure it isn't a totally depressing experience. And, just like with the last issue, they've left us on one heck of a cliffhanger. Sure, some of expressions and character work can be distracting but, all in all, it's an exciting issue and ends with a whole lot of promise. 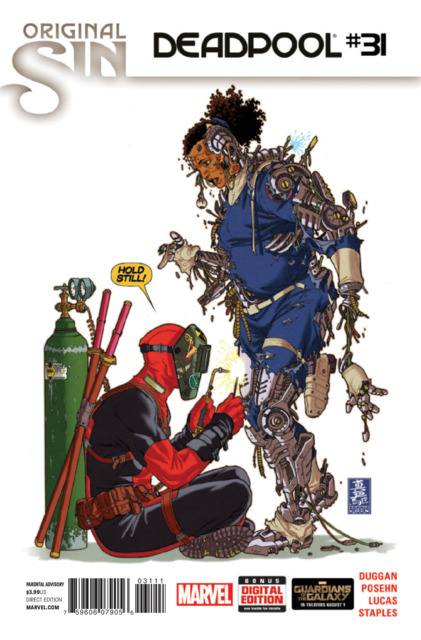