Deadpool #26 - Death Comes To Tinseltown (or The Last Hitler)

If you could go back in time, would you kill Hitler? Well, one man tried to and he failed. Now a time-traveling Hitler is out to kill Nick Fury and it's up to Deadpool to stop him!

The "lost" issues seem to be the place where co-writers Gerry Duggan and Brian Posehn can really let loose and have a crazy amount of fun creating the most absurd and hysterical issues possible. Yes, they kicked the volume off with zombie Presidents, but these flashbacks take the series to a completely different level of hilarity. I've enjoyed each of these flashback issues a whole lot, but this one? Man, I absolutely LOVED it.

There's an unparalleled amount of funny in this issue. To talk about what I loved about the plot and characters would potentially spoil some of the superb lines and references, and honestly, that's the last thing I'd want to do to you. You deserve to be taken by surprise by all of the ridiculous things that occur within the pages of this comic. Virtually every scene had at least one moment that made me laugh out loud. Really, you should thank me because it's seriously taking all of my willpower not to praise at least one of the bits that made me burst into laughter. Look, if you've been reading the other "lost" issues, then you know how ludicrous they can get, right? Now imagine that style of storytelling but with a time-traveling Hitler. There's so much comedic potential and they do a brilliant job delivering all kinds of gags.

While Duggan and Posehn set up the scenes and offer the amazing lines, artist Scott Koblish and colorist Val Staples do a beyond phenomenal job bringing it all to life. Koblish's character work is priceless and it's the perfect way for Duggan and Posehn to hit us with some of the randomness they're able to generate. From the hilariously strong expressions to the various locations and technology that comes into play, Koblish and Val Staples tackle each and every scene with an incredible amount of talent. Not only do the two do exceptional work matching the very specific tone, but they also do a thoroughly impressive job making this feel like a much older comic. The co-writers through a lot their way and each page looks awesome.

Bad stuff? In this issue? Nonsense. But really, I have no major complaints whatsoever. This issue filled my heart with so much happiness.

Hey, do you like laughing or even smiling? Yeah? Cool, then you're probably going to really, really like this issue. Sure, comedy is subjective and all that, but I'm having a seriously tough time imagining anyone who wouldn't have a blast with this issue. Duggan and Posehn deliver comedy gold and Koblish and Staples do a tremendous job selling each and every joke. Who would have thought a story about Hitler could be filled with so much joy? 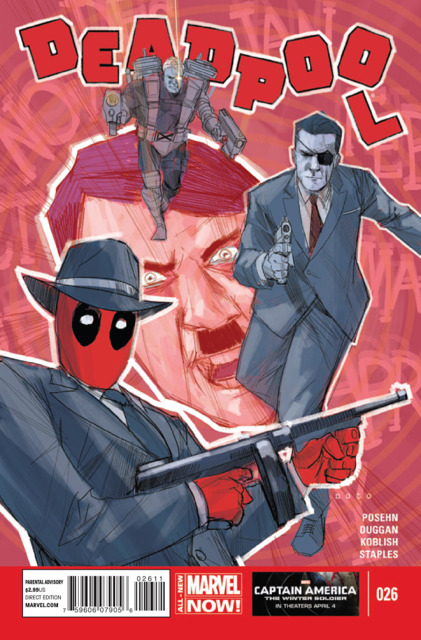