S.H.I.E.L.D. made a big mistake when they decided not to pay Deadpool after he saved the day in the 'Dead Presidents' story. Now he's coming to collect and, if it isn't too much trouble, also find Agent Preston a new body.

The beginning of Deadpool vs. S.H.I.E.L.D. does a nice job respecting what just went down in The Good, The Bad & The Ugly while also reintroducing us to the more frequent amount of comedy we've come to expect from a book all about Wade Wilson. It's not blatantly slapping us in the face with emo Deadpool 24/7 and he's quite not back to normal yet, either. Instead, the aftermath of the twisted story is subtly hinted at here and there -- be it Deadpool saying he's not in the mood to get smacked around or dodging the subject of his daughter in the opening recap. Oh, and speaking of the opening recap, and that ADORABLE Deadpool finally has an artist credit. All hail Irene Y. Lee! Still waiting for that insanely cute Wade to be turned into a plushie, Marvel.

Co-writers Gerry Duggan and Brian Posehn have done a solid job creating a new story that'll seemingly stand apart from what they've already shown us. Like said above, they're balancing Wade well, but they're also doing great work with this new narrative. This new premise may have a familiar element (draws a strong parallel to a recent VENOM story, and even prior to that it's a concept we've seen before), but who really cares when it's loaded with potential for some excellent encounters? Not to mention the price on Wade's head is just a small part of the story and there's quite a few more plot threads which have been established.

Not only that are they doing fine work with characterizing Wade and forming a new plot, but they've also hit us with plenty of great laughs in this one. Seriously, there's so much to appreciate here. There's Deadpools in his head pulling a Three Stooges during a serious conversation, bickering over a new "Tyler Perry" movie, and the second half of the Crossbones fight is absurdity at its finest. Then there's nods to the talent behind the book (the editor's name is scrabbled on the stall and the homeless person sure looks like co-writer Gerry Duggan), memes (Adsit = best grumpy cast impression ever) and there's even an amusing nod to SUPERIOR SPIDER-MAN. Also, this issue reveals the one question we've always asked: what case does Sabretooth have for his cell phone and do his texts include acronyms?

Artist Mike Hawthorne and colorist Jordie Bellaire continue to prove they're a great fit for the book. While Declan Shalvey's style was the perfect compliment to the last story's atmosphere, Hawthorne is able to skillfully bring to life whatever Duggan and Posehn give him -- be it comedic, violent or dramatic. The detail with the environments and inanimate objects sometimes take a bit of drop (most notably in the final scene), but the character work is fantastic and Bellaire has this great ability to give scenes more energy with her colors (perhaps it's her mutant power?). All in all, the expressions really bring this cast to life and do a great job selling the gags.

If you've watched the first episode of a certain new Marvel show or follow news about this title, then you'll see big reveal in the cliffhanger coming three panels before it happens. Don't get me wrong, it's a fine development and reveals there's more going on than we knew, but this character's emergence is given a full splash page. It would have been cool to instead give this extra space to flesh out one of the previous scenes. And while I obviously love the life Hawthorne breathes into these characters, this person's debut felt static compared to the visuals in the rest of the book.

Deadpool vs. S.H.I.E.L.D. is taking everything that worked so well in the previous storylines and putting them into one new plot. It's serious and has emotion behind it, yet isn't nearly as somber as The Good, The Bad & The Ugly. It's hilarious and violent, yet it's not totally over-the-top with these elements like in Dead Presidents. While many first chapters for new stories spend much of the time hitting us with exposition and wait until the second part to get things really rolling, this first issue is able to establish the basics without bogging everything down and never fails to entertain. It's hilarious, fun, great to look at and best of all, it's attention-grabbing. Deadpool vs. S.H.I.E.L.D. is off to a great start. Sure, the word "great" has been used seven times in this review, but that's because this issue's... well, great. 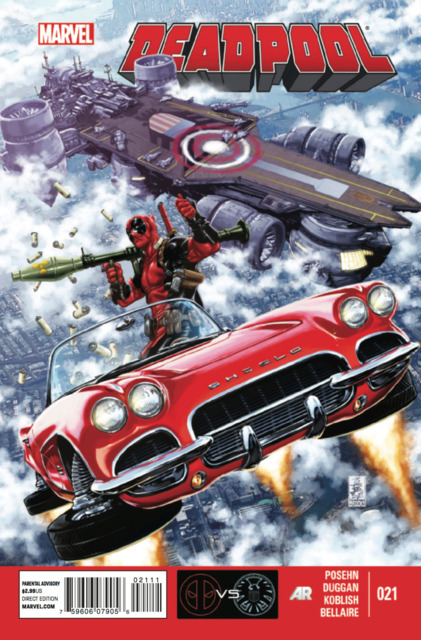