Deadpool goes after Vetis' latest target and Michael tries to make a(nother) deal with the devil.

Mike Hawthorne and Val Staples have created a mighty fine looking issue. Hawthorne's illustrations are topnotch and perfectly express the book's various tones. His detailed work can make Deadpool a frightening dude when he's dark enough to snap a regular guy's arm, or a lovable looking fool as the smile can be seen through the signature mask. The segments in hell look great, too, and Mephisto's entrance is appropriately gross/disturbing. All of this is then brought to live in an awesomely vibrant manner thanks to Staples' colors and the end result is a glorious looking book.

As always, I'm digging the script by co-writers Gerry Duggan and Brian Posehn. This issue was a bit lighter on the laughs, but there were still plenty of solid remarks and seeing Deadpool through Daredevil's radar was hugely amusing (he uses the pouches wisely). Additionally, they've done a good job creating a story way richer than the initial story arc. Not to bash the whole Undead Presidents thing, but I think it's safe to say we all loved it because of the jokes and fights -- not plot twists and developments (aside from the ending, of course). While they're still going big on the one-liners and entertaining action, they've definitely put a stronger focus on the bigger picture and this issue's cliffhanger really has me intrigued. I gotta wonder, though... what happen to the organ stealing plot?

This was a pretty embarrassing showing for Deadpool. Duggan and Posehn are killing it with the plot and dialogue, but Wade fluctuates so much when it comes to his skill and, as a long time Deadpool fan and battle forum addict, it's distracting. Last issue he humiliated Batroc and Taskmaster -- two very skilled characters -- but this issue he screws up a basic jump (basic for characters in their universe, that is) and ultimately gets humiliated by Daredevil. Wade is well known for being one of the most agile street level characters around, so I have no reason whatsoever why he couldn't properly execute a leap (other than to deliver a good joke immediately after).

Now, this isn't just some fanboy rant -- I can totally swallow Deadpool losing to Daredevil in a book, but I strongly disagree with how it went down. If we look at Wade's years of durability feats, it's clear it takes some degree of superhuman strength to really make him see stars or keep him down long enough to tie him up. Daredevil certainly could reach that point, but it would take time and that's not something which happened here. Also, seeing as Deadpool has reacted before gunmen can pull the trigger numerous times in the past, it makes it tough to believe he'd get sucker punched by a regular guy he's looking at and jumped by police. And speaking of police, how'd Deadpool get away with shooting a gun in the heart of Times Square? That place is packed with security nowadays, so wouldn't the authorities be all over him shorty after? Relatively minor gripe, but the thought immediately hit me when the scene went down.

Deadpool slipping up a few times and being taken down easily by Daredevil may not bother some of you, but it definitely takes away from the read for me. Duggan and Posehn are on the right track when it comes to filling the book with sharp dialogue and an enjoyable plot, but Deadpool's effectiveness is fluctuating too much for me. It's not enough to make me dislike the book -- not by any means -- but it is an aspect that bothers me a bit. Regardless, Hawthorne and Staples provide amazingly good visuals and, while I hate how quickly it ended, the brief scuffle between Wade and Matt was terrific before it came to an abrupt halt. 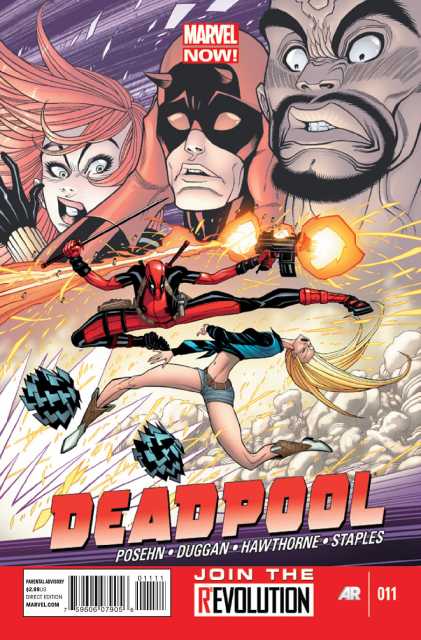