Time has passed since the students hit Vegas and killed one of their own. Dealing with the consequences isn't easy for everyone.

Oh man. DEADLY CLASS is back and we discover that a few months have passed since the events in the first arc. Marcus and his friends took a roadtrip to Vegas and it didn't end too well. Back at the school, they have to hide the fact that they killed a fellow student. Sure, we're talking about a school for assassins but there are more consequences than just getting sent to the headmaster's office.

The issue starts out catching us up with what's happened in the period between arcs. We see that trying to hide the secret is not so easy for some. There's also the case that the body was taken by the mysterious scarred figure from Marcus' past. Aside from that, Rick Remender gives us more of a glimpse at the students at King's Dominion School of the Deadly Arts. These may be fictional students learning to be killers but Remender also shows us some of the human side to them. The high school years can often be difficult and trying to hide a murder isn't the only thing they're dealing with. It's a nice touch to balance the violence we sometimes see in the series. Remender is doing a great job fleshing the characters further.

Of course Wes Craig does his part to bring life to everything. I love the variety in his panel layouts along with the occasional shifts in perspective in different scenes. There's often a great sense of fluidity even when the scene calls for characters just having a conversation. The panels don't feel static and it gives the pages more energy when you wouldn't expect it to be possible. Seeing Lee Loughridge's colors is like buying a bag of candy for your eyes. It all looks so dang good.

From the beginning, this series has won me over. It's an enjoyable read each time and I just wish I could read more right away.

School's still in session. With the death of a fellow student, Marcus and his friends have been trying to maintain a semblance of a normal life, despite the fact they're all in a high school for assassins. We still have the mysterious killer from Marcus' past making plans in the background and it looks like things might be about to get even worse for all involved. Rick Remender does a great job giving humanity to a cast of killers. You can totally see them as typical high school kids but then you're reminded that they're much more than that. Wes Craig's art and Lee Lougridge's colors continue to amaze me. Month after month, DEADLY CLASS remains one of my favorite books. 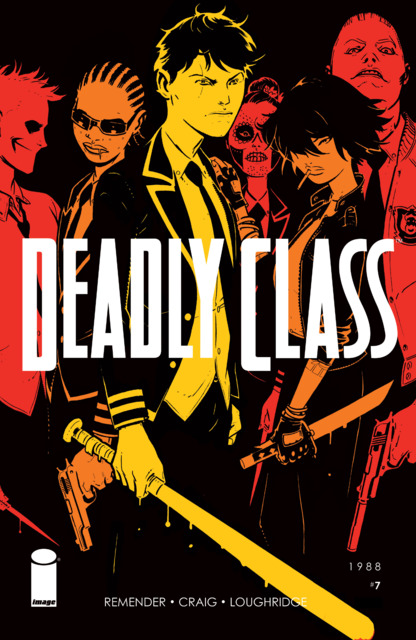