Marcus has an assignment to complete while attending a school for assassins. Does he even want to think about what happens if he fails?

In the first couple issues, Rick Remender has introduced us to many different characters attending the King's Dominion School of the Deadly Arts. To change things up a little, this issue focuses on Marcus and Willie, as they attempt to complete their assignment (which involves killing). As heavy as that sounds, we get a refreshing look at these two kids. You have to remember, they are just that, kids.

Being set in the 80s, we get some nice little references without it being too much. Often when you see or read stories set in a certain era, the references can easily get over the top. We get to find out more about what makes Marcus tick as well as what Willie's story is. You'll start to wonder if they really belong at the school and that feeling is part of the fun in reading this series. Remender doesn't take the easy route and just make it a matter of fact that this is a school full of assassins. They feel like they're characters that could have a heart. They're just in a bad situation. Normally you would think it'd be difficult to relate to a couple of killer wannabes but Remender adds more to who they are.

I totally dig Wes Craig's art and Lee Loughridge's colors for this series. It has a great mix of establishing its own feel. We've seen the occasional story with killers or young students but this doesn't feel like anything we've seen before. It's such a cool feeling having a comic with an interesting story combined with great art and color.

While the story pulls in a little to focus on Marcus and Willie, it's a bit of a change of pace after seeing so many of their fellow students in the previous issue. Getting to see more of who they are and what makes them tick is cool but it almost feels like the action takes a back seat for most of the story. It's understandable and refreshing that this isn't a simple action story but I was left wanting a little more. We also get the tiniest glimpse of another character that is bound to cause serious problems in future issues.

Perhaps the main issue is Marcus isn't a completely likable character. We do find out more about him but because of his outlook on things, he can come across as an ass. That may be part of the journey we'll see with him. He was just in a horrible place. With the ending of this issue, there's no telling what will happen next.

There's something about this series that is simply fascinating. Rick Remender is taking the concept of a school for assassins and fleshing it out in an interesting way. Previously we got a glimpse at some of the other students and in this issue we focus more on the main character, Marcus, and one of his classmates. With the story focusing on just the two of them, there is a slight isolated feel. The nice thing is it does slow things down a little to give the characters a more realistic feel. Wes Craig's art and Lee Loughridge's colors are a treat and really compliment the story, giving it a fresh feel. There might be a little less action in this issue but we get a pretty explosive ending. 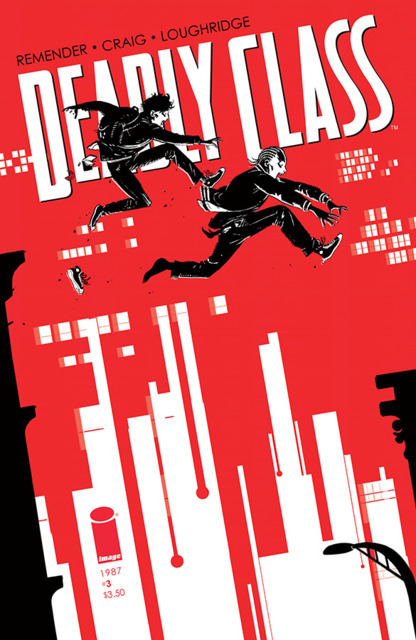