You thought high school was tough? Wait until you see what it's like when it's full of assassins.

The second issue of DEADLY CLASS is here and we get to find out what King's Dominion School of the Deadly Arts is like. Rick Remender does a brilliant job capturing the delightful essence of life in high school while cranking it up with a student body consisting of actual killers. The first issue briefly introduced us to Marcus Lopez and here find out a little more about him plus we get a good look at what the school for assassins is like.

You can't have a story taking place in a high school setting in the 80s without your typical stereotypes and cliques. Remender takes those but morphs them into this new world he's creating. The more we see of the school and Marcus' new fellow classmates, you can't help but want even more.

Wes Craig's art and Lee Loughridge's colors adds to this new comic world, giving it a nice and distinct look and feel. There are so many different students and groups. It's great to see a variety of characters rather than have everyone feel the same.

Getting a great new series is like finding a hidden treasure. It's a thrill being able to jump into a new series and not have to worry about decades of continuity.

I had high hopes for this series and the second issue is even better than the first. If you've ever wanted to jump into a fresh new series, Rick Remender and Wes Craig are making an extremely compelling argument to completely fall in love with this series. With so many characters in the background, there's no telling who will step forward or where the action will go. We're seeing there is more to the story and lead character than we thought. On top of all the fun, we get another extended issue because that's just how cool Remender and Craig are. There's nothing more to say except, buy this book. 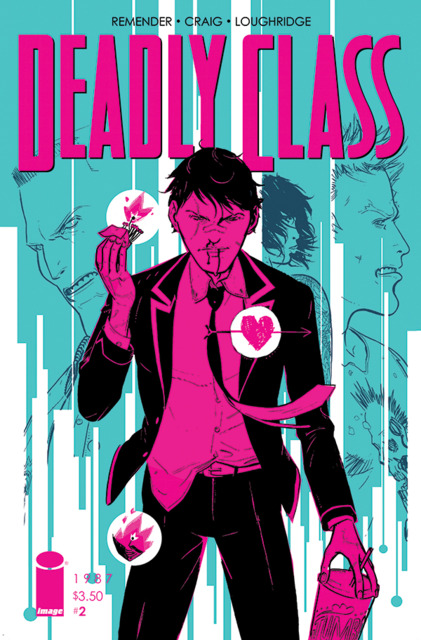