You thought your final exams were tough? They're nothing compared to those in a school for assassins.

This series continues to get more and more insane with each issue. Marcus Lopez got off the streets of San Francisco and enrolled in the Kings Dominion School of the Deadly Arts. His life hasn't gotten any easier. He's had to deal with a deadly enemy from his past, a crazy drug-filled trip that lead to another deadly encounter with some major killers, and back at school, he's alienated what little friends he's managed to have. Now that final exams have arrived, it's a literal matter of life and death. There are two kinds of students at the school--those from a legacy of killers attending the school and those that are new (referred to as "rats"). The final exam is for the privileged to hunt and kill all the rats.

Rick Remender and Wes Craig have always crammed in plenty of action into the series, but there's plenty of story as well. With such a big cast of characters, we get to see the different relationships, interactions, and drama that can go on in a high school setting. The difference is you have the added factor of everyone training to be an assassin. Remender has given each character a different feel. You can see the essence of who they are as they continue to develop. It's not just a matter of reading two-dimensional characters that are killers. There is plenty of depth within.

With the final exams happening, the book has taken a major turn. Just when you think things couldn't get any worse, you reach the last page and see what more Remender has planned for the characters.

Wes Craig's art along with Jordan Boyd's colors are a fantastic. They managed to perfectly capture the mood in each scene and in each panel. I'm always impressed with the variation in panel layout. It's almost odd but some panels have minimal backgrounds which is something that usually bothers me. That isn't the case here. Craig does add in plenty of details within each panels but often shifts the focus to the main character within a particular panel. It adds a great variety and really makes the characters and action pop off the page.

DEADLY CLASS remains at the top of my list of favorite comics. Each time a new issue is released, it's among the first I'll dive into. Rick Remender and Wes Craig are giving us the perfect blend in storytelling with plenty of action, character development, drama, and tragedy. If you haven't been reading this title, you really need to fix that. Go back and pick up the trades. Get caught up. I just love this book so dang much. I can't get enough of it. 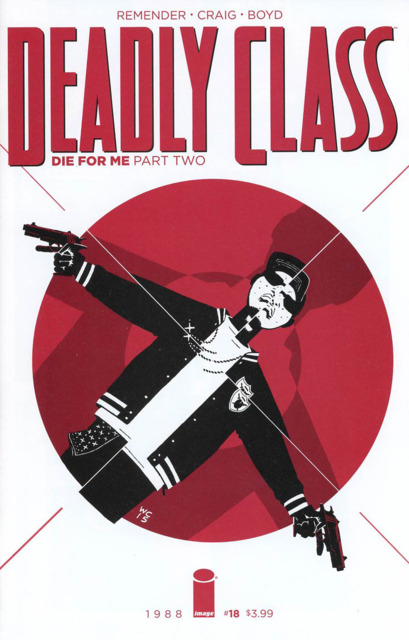