We witness a day in Marcus’ life with his day job and the big mission against his nemesis.

DEADLY CLASS was my favorite new series of 2014. There’s a great mix to the series as we have a sort of coming of age story set in the 1980s mixed with life in a school for teenage assassins. Our main character, Marcus Lopez, keeps finding himself in messy situations. There are some of the typical problems you might expect involving his girlfriend and the other girl he likes, being late for work, and the consequences of having a rough night before.

In this sense, the issue almost feels like it has two separate parts. With the different aspects of violence, there is a refreshing feeling seeing Marcus trying to get through his day at his job at a comic shop. Things don’t go too smoothly and it provides for some entertaining moments. Just when you feel like the issue is taking things a little lightly and we won’t get to the core of Marcus’ problems, he and his friends prepare to take on Chester, aka “Fuckface.” This is where the issue truly shines. We have a book about a bunch of kids learning how to be assassins. Seeing them lay out the plan and begin to set it in motion is brilliantly done. And of course there will be some hitches in the plan to keep readers in suspense.

Wes Craig’s art and Lee Loughridge’s colors never cease to amaze. There’s a great flow and each character has their own feel with the way they carry themselves and move. Despite being a series of still comic panels, you can get a sense of their movement and emotion in each one. Each panel is full of detail that adds life to this comic book world.

I thought it was going to be just a ‘good’ issue but once the raid started, my excitement for the story cranked up.

DEADLY CLASS remains one of my favorite new series. We have an interesting cast of characters and the mix between 80s teenage drama with aspects of training to be an assassin keeps readers on their toes. Rick Remender has created a remarkable world and Wes Craig’s art with Lee Loughridge’s colors are top notch. I have to assume you’re reading this book already. If you’re not reading DEADLY CLASS, you really need to fix that. 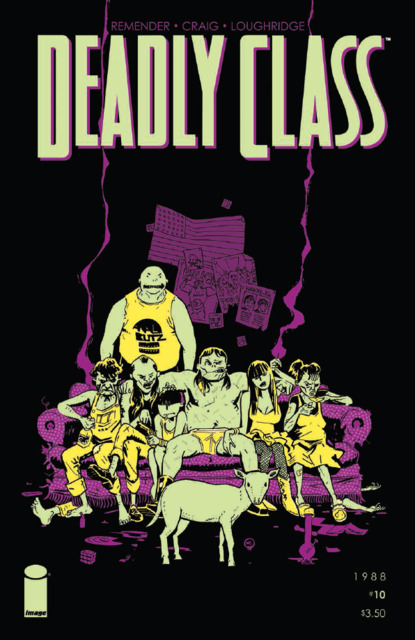