Journey back to the 80s in San Francisco. Things were a little different and there was a school for assassins. Witness your new favorite comic by Rick Remender and Wes Craig.

There's been a lot of anticipation over Rick Remender and Wes Craig's new series from Image. We've seen other comics dealing with schools for youngsters and even schools for assassins and other bad stuff. Once you start reading this issue, you'll see this is more than that.

The introduction to a new character is important when creating a new comic universe. It's all about first impressions and how you'll look at them later on. This story may take place in San Francisco in 1987 but Rick Remender shows us the dark side of the city. Marcus is as far from your typical comic book character as you can get. Living on the streets, we get a glimpse at the depravity that can exist in a city. Marcus may have been hardened by what he's gone through to this point but we do see there is more to him than an angry homeless teen.

Wes Craig has the task of visually entertaining us with an issue that mainly takes place showing us what Marcus' life is like. When the action does kick in, it's a glorious sight. Lee Loughridge's colors are perfect for the story and art. This is definitely a comic you'll want to read over and over.

There is a fine line between trying to remain grounded in reality while featuring a hidden school for deadly assassins. Hopefully everyone will embrace this series. I've heard this comic described as The Breakfast Club mixed with a school for assassins. That may be the case in future issues but this one feels like it's so much more than that.

We've been waiting for Rick Remender and Wes Craig's DEADLY CLASS for months and it was absolutely worth the wait. Rick Remender turns away from the big superhero and sci-fi action by giving us a story that feels like it could exist in the 'real world.' Wes Craig's art and Lee Loughridge's colors will bring a smile to your face and make you feel like a kid in a candy shop. We're almost getting spoiled here with the story and art. Don't miss out on this new series. You'll definitely regret it if you do. 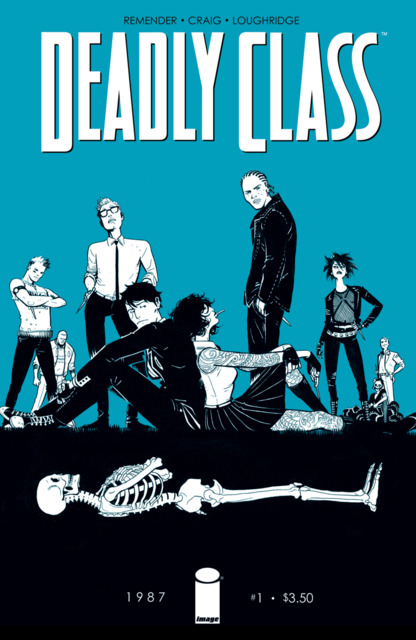