Imagine waking up in a motel with no memories and finding a gun on the nightstand. This comic takes off like a rocket from that moment.

Let me start off immediately by saying you have to read this comic.

There's always a gamble when it comes to checking out a brand new comic not associated to an existing franchise. Boom! Studios has released a new series created and written by Christopher Sebela with art by Chris Visions. It's the sort of comic that smacks you in the face, in a loving way.

The comic starts off with a man waking up in a motel with no idea who he is or how he got there. The phone rings and he sees a gun on the nightstand. He hesitates to pick up the phone as it rings but as he does, he hears, "They're coming, Sam. You'd better start running." And then it all just explodes from there.

Despite not having any memories, "Sam" is able to quickly move into action. We get an incredibly over the top story full of action and adventure. Sebela and Visions do not hold back. Just when you think you have an idea where everything is going, you get the rug pulled from beneath you.

The art by Chris Visions and colors by Ruth Redmond are something worth seeing. It definitely captures the vibe of the story perfectly and makes you want more. It's hard and gritty without coming across as graphic.

This comic caught me by surprise. It was a great surprise at that. This is a great fresh story anyone can jump into. I have no complaints.

DEAD LETTERS was a comic I hadn't heard about until I laid eyes on it. It's great being able to dive into a new comic and not have to worry about anything that happened before. Our main character has no recollection who he was before he woke up and the action gets pretty crazy. The art and colors captures the mood of the story and gives it a different feel from your typical comic. Do yourself a favor and check this book out. 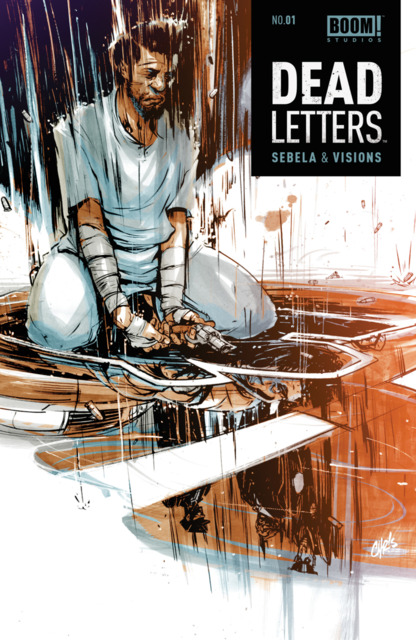