The Boys return to the scene of the crime. In trying to help Crystal, it turns out Crystal just might be able to help them.

Last issue we met Crystal, the daughter of a pair of eccentric parents. When the Dead Boys saved her life, she caught a glimpse of their names as well as their former school, St. Hilarions. When she convinces her parents to transfer her into the school, the Boys feel they need to follow since the school isn't the safest place. This is where both died (many many years apart) and it's full of dark forces.

The issue starts out in an unexpected way. We find out more about Crystal as we see what occupies her free time. The school is what you'd expect. As the new student, she immediately becomes a target by the regular students while the evil forces are at work as well. Through a flashback, we also find out a little more about Crystal which begins to explain her connection to the Boys.

Mark Buckingham's art is beautiful along with Lee Loughridge's colors. There's a lot to see despite the setting mainly taking place in the school. Each character has a distinct feel to them and between fantasy worlds, flashbacks and the current setting, each page is a visual treat.

This may not be a direct fault to the issue but Vertigo made a big deal about Death's appearance. Even though they only showed one panel, you wouldn't think the appearance would just be a flashback. It felt a little exploitive.

The fact that there were some 'mean girl' bullies at the school felt a little cliche. The pacing of the issue felt a little fast at times with perhaps not a whole lot happening. Crystal has just arrived at the school but you don't really get a sense of it being a school. We don't necessarily need to see pages taking place in a classroom setting but it's hard to gauge what the day was like.

Vertigo's newest series is off to a great start. Whether you're familiar with the Dead Boy Detectives from their previous appearance in SANDMAN and their own miniseries, this is a book anyone can jump right into. Toby Litt and Mark Buckingham are taking the characters and adding to their story. There's a mix of innocence and adventure as we see the new developments come in. DEAD BOY DETECTIVES may be about two dead boys but there is so much life in this series. 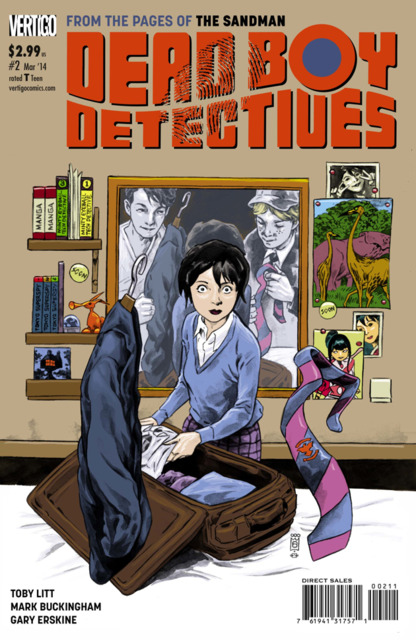