Gage has kidnapped one of the bad guys and wants answers. Unfortunately for him, they're being followed by some evil people on motorcycles.

This fourth chapter feels like Justin Jordan wrote a script that's basically tailor-made for Matteo Scalera. Time and time again I've raved about how well this dude can bring motion and energy to life. Well, he puts that ability to full use here, because the issue is literally one crazy and violent chase scene.

As expected, Scalera makes it look downright amazing. Not only can you appreciate the sheer speed behind these vehicles as they race down the road, but you can also feel the impact as motorcycles clash against a van and people hit the pavement with absolutely brutal force. There's one kill here that is guaranteed to drop your jaw. It's one of those moments where you probably should look away but you just can't. It's viciously detailed.

Moreno DiNisio's coloring is just icing on this oh-so-delicious and bloody cake. Whether it's a scene in the dim van or a scene moving along the barren landscape with a clear sky, DiNisio's coloring does a tremendous job fitting the overall tone and compliments each panel incredibly well. All in all, this is an awesome looking book.

Justin Jordan's script remains concise. Sure, there's exposition scattered here and there when we finally get a new plot detail or two, but he does it in a refreshingly blunt and effective manner. These characters don't ramble on and on about how they're feeling or what's going on around them. They get straight to the point and these feel like organic conversations instead of blatantly forcing extra information into what they're saying.

This issue is also packed with panel layouts that go across two pages instead of just one. This decision really benefits the high-speed events going on in the book. The pacing isn't hindered by needing to turn the page to see what happens next. Instead, Jordan makes sure every set of pages has a beyond satisfying course of events and the issue never slows down. He even manages to fit an interrogation into this frenetic sequence and it doesn't hinder the issue's absurdly fast pace one bit.

My biggest concern is about the series as a whole and not necessarily just this issue. I think there's a total of 6 issues and it feels like we're racing towards the conclusion while there's still a lot of information we're missing. Don't get me wrong -- I obviously loved this issue -- but it has me a bit worried that the pacing of the upcoming issues will take a hit as massive amounts of information are forced into the pages. We'll just have to wait and see how Jordan handles wrapping it all up. In the meantime, there's no denying he's at least providing one hell of a ride.

This fourth chapter is a ridiculously entertaining read. Jordan pretty much creates a script that compliments Scalera's style and the end result is a completely gripping spectacle. The plot is still inching along (to be fair, there's a solid narrative-driven scene worked in here), but I can hardly complain because this is without question one of the best chase sequences you'll ever read in a comic. Jordan makes sure it's wicked and Scalera masterfully brings it all to life. It's savage, overflowing with intensity and is a seriously exciting experience. 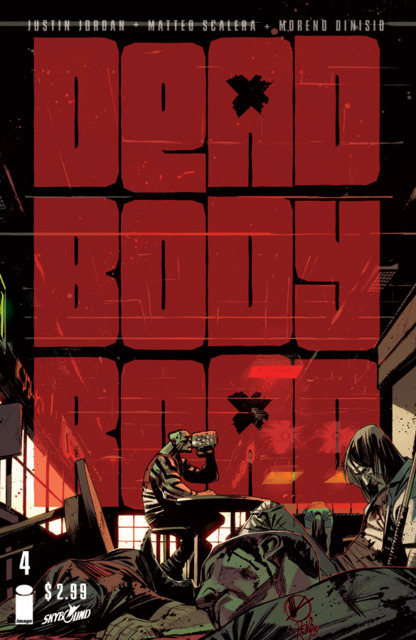