It's a story about revenge after a horrific event. Justin Jordan and Matteo Scalera deliver a hard hitting and gritty new series.

We may have seen stories like this with similar themes but right away you get a sense that this could be pretty epic. The story deals with a man losing his wife during what appeared to be a simple robbery. Justin Jordan immediately sets up the grittiness of the tone. The opening scene is not a pretty one but it tells us everything we need to know. Even though we sort of drop in on the action, seeing the results that will set off the aim of this series is almost haunting as you see the main victim practically staring off the page right at you.

What we're going to see is a man who lost his wife in a violent crime go after the men responsible. Because of the nature of the crime and some details we get along the way, this likely won't be a simple act of revenge. There will be a lot of men to go through before everyone responsible pays for their crime.

Matteo Scalera's art throws the action and violence in your face. There's a great feel to it all and you can get a strong sense of what each character is going through or thinking about as you see their expressions on each panel. There's some really nice little details in the way characters stand or use their hands during conversations. There's plenty of great angles too that really gives the story a distinct feel. Moreno Dinisio's colors also adds to the detailed grittiness. This adds to the shadowy scenes and wait until you see the car-chase scene.

This is a really strong beginning to the story. There are that still need to be fleshed out. There are a few different characters and in the middle, we're introduced to another and it's not clear what exactly his intentions are. We can assume he'll cross paths with the main character seeking revenge. Some areas feel as if the events progress a little too quickly. It's understandable that because this is a mini-series, time can't and shouldn't be wasted but there are slight mini-jumps in the story as we start to see the escalation building quickly with no clear description on how they got to where they were.

At just a glance, you can immediately tell this is going to be a great series. Justin Jordan's been known not to hold back and that's evident here as well. We've seen many stories of a man seeking revenge but there is a great feeling and energy here that makes it stand apart from other similar stories. Matteo Scalera's art and Moreno Dinisio's colors work wonderfully here. There's an almost cinematic feel to it all and you'll want to read through the issue again just to take it all in. This is the type of comic that punches you in the gut with its storytelling. Getting punched in the gut may not sound fun but this comic absolutely is. 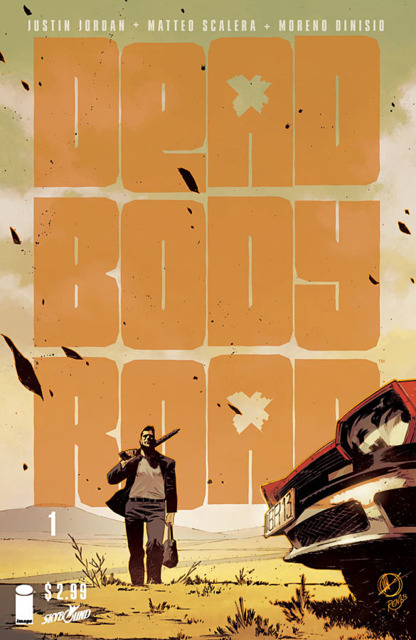