The DC Universe is going through huge changes. Spoiler-free review.

If you want spoilers, you can find them HERE. The issue is on sale May 25.

DC Universe: Rebirth will unleash a wide range of emotions. Long time readers have seen the characters go through various changes over the years. The New 52 had some interesting aspects, but there were just certain things missing. Geoff Johns is fixing that.

It's not often a comic can have such an impact on readers. As you turn each page, you realize more and more what you've been missing. It's almost as if we suffer the same thing characters in the DCU are going through--we've forgotten certain things. Avoiding spoilers, we do immediately witness the return of character you wouldn't expect to see. It's a moment that brings a huge smile to your face. It's this character that reveals something much bigger has been going on since the Flashpoint story arc created the New 52 universe. It's this character's mission to try to inform others what's been going on and that there's a hidden threat out there.

Johns takes us across the DCU. This allows us to see several familiar faces. There are many plot points being set up here. This is definitely reshaping the comic universe we've come to know. It's an exciting time. Rebirth isn't a reboot. It's more of a course correction. There are certain characters making a reappearance within the pages along with gigantic and crazy new developments revealed and teased.

Joining Johns is an incredible art and color team. We are treated to the works of Gary Frank, Ethan Van Sciver, Ivan Reis, Phil Jimenez, Brad Anderson, Jason Wright, Joe Prado, and more. You'll be both excited and afraid to turn each page. The intensity of the story continues to build, and you feel the tension getting thicker. The visuals are simply amazing and worthy of the epic story being told. There is a great mix in the old and new with the characters seen here. At times, you'll find it almost hard to believe this is the New 52 world. It's incredible how seamlessly they fit all the characters and pieces together. One revelation concerning a 'new' and the returning character is brilliant. It's like we're getting the best of both worlds.

There is one revelation that may be a little controversial. As with the entire issue, it really works if you're able to read without being spoiled. I have no problem with the twist at the end and the door it opens up. I'm intrigued to see where it will go. I am completely on board with everything being set up here.

There was a lot riding on Rebirth. It felt as if some books were in a holding pattern the past few months. We may have come to terms with certain changes in the New 52, but that doesn't mean they can't be tweaked. Geoff Johns is giving many fans what they want. New developments are being set up to set up to drive other titles forward to exciting places. This issue just really hit the right notes with me. There were some emotional surprises, and I didn't realize how much I had been missing certain characters. If this is any indication as to what we can expect in the Rebirth titles, it's going to be a fantastic time to read DC Comics.

Note: Please avoid discussing spoilers below. If you must bring up a spoiler, use the spoiler tags. Feel free to discuss spoilers here. 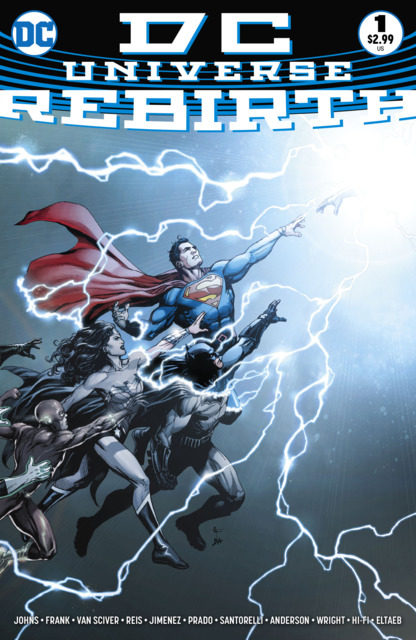