The Day Men protect and do the bidding of the ruling vampire families. This new series gives a different take on the vampire genre.

Vampire stories have taken a hit in recent years. With the numerous attempts to revitalize the genre, the results were an inordinate amount of stories that left a sour taste in the mouths of readers. Thankfully it is still possible to deliver a fresh take and that's exactly what we get here.

Matt Gagnon and Michael Alan Nelson give us a vampire story where the vampires aren't the main focus. It's not often you really think about what the vampires do during the day, besides sleep. Having such a huge weakness makes these powerful creatures way too vulnerable. In this world, there are powerful ruling vampire families and they train and utilize "Day Men" to service their needs.

In the first issue, we meet David Reid, a relatively new Day Man. Throughout the story, we do discover some of the minor duties that go along with the job. These little details are what truly fleshes out the whole concept. Running errands and protecting the masters is just part of the gig. Seeing mention of mundane responsibilities shows that the writers have given all this some thought.

Brian Stelfreeze's art sets up the vibe right away. There is a nice variety in the looks of each character and I found myself stopping several times and taking in all the details of background objects and scenery. I tend to get really distracted when the backgrounds are ignored in comics.

Being a first issue, there's always the gamble of how much to reveal to the readers from the beginning. The main character, David, for example, something about his look just didn't jive with me. The bit of white in his hair makes him appear slightly older yet you also get the impression he's more on the younger side, having recently finished his training. There was a moment when he was drinking coffee he just didn't look like that formidable of a character. You do realize there is more to him than his appearance.

We don't know what the full story on the vampire families but that's something we will discover through the course of the series.

Boom! Studios has unleashed a new vampire series. The great news is Matt Gagnon and Michael Alan Nelson have come up with a different twist on the genre. Rather than focus simply on the bloodsucking creatures, we are introduced to a new world where powerful vampire families rule different territories. In their employ, they have "Day Men" that serve and protect them during the day. Brian Stelfreeze's art creates a great atmosphere with a nice variety of different types of characters as well as details in the background that will catch and hold your attention. If you've ever had any interest in the vampire genre, this is a series to check out. Breathing new life in what has felt like an overplayed concept, DAY MEN shows us there is plenty more to the idea of vampires and the world they live in. 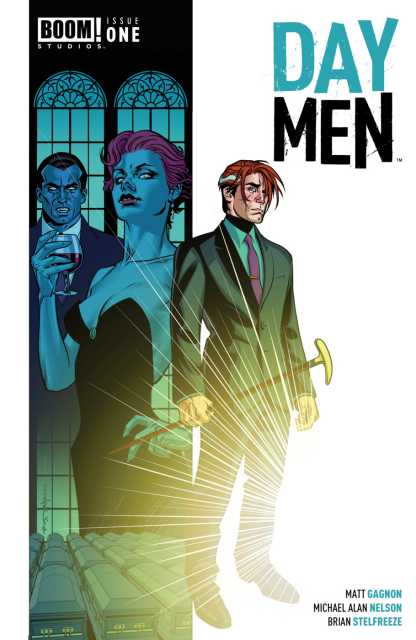