Dash #1 - The Case of the Mysterious Zita Makara, Part 1

Dash Malone -- Dashell, long-form -- has a name that only exists in crime stories. His job -- private detective -- is equally at home in the midcentury noir. He smokes, and drinks whiskey at his desk. But his personal life isn't so noir-standard. Dash Malone is neither married to his job nor chasing down dames; the con artist of his dreams is a man.

Casting an openly gay protagonist in a period noir piece definitely provides rich story potential; in contrast to a more modern setting, we're going to see Dash navigating an entirely different (and more hostile) social climate. Officer McGillicutty seems like a decent ally, but I imagine others on the force won't be so kind (especially given the noir trope of animosity between police and P.I.'s, and the "DEGENERATE!" cast Dash's way by one of the officers). And while Dash is defined by more than just his sexuality, his personal life absolutely has an impact on his handling of cases -- something that's clearly created friction with Plinks, and could potentially make things interesting later.

The mirroring between the scenes with Zita and Plinks is clever, exposing Dash's impassioned blindness to Plinks' less-than-legal dealings, even as he isn't charmed by the token femme fatale. It's as much on-tone with traditional noir as it is a twist; while Dash's sexuality sets him apart from stock hetero hardboiled types, his capacity to let an infatuation lead him into a complex and dangerous situation rings familiar. That the mysterious woman remains mysterious and tragic irrespective of Dash is excellent (and lends her an extra bit of agency).

Delia Gable's choice of angles for the first few pages are cinematic, and tone-setting in their own right. The second page is essentially a head-to-toe of the vampy Zita, and it's both alluring and ironic. Gable also infuses every panel with a sense of activity -- none of the characters stand plainly, and everyone seems to be captured genuinely mid-sentence.

Dave Ebersole has a distinctive voice, and he's good at creating immediately recognizable characters. Cindy, Dash's cheeky secretary, is fleshed out so well within a few panels that it's easy to imagine what her voice sounds like. Ebersole also handles the push-pull between caption boxes and speech balloons deftly, and Dash's inner monologue is as much a character as he is.

First issues of new series sometimes fall into the trap of putting too many words on the page. I think there's plenty that could be inferred or revealed more deliberately; the book will feel as though it's hit a stride when the dialogue pares back a bit.

On the visual side, I'd like to see a little bit more consistency vis-a-vis background detail; Gable isn't shy about fleshing out exterior shots or wider-angle indoor scenes, but a decent number of panels also sit atop plain solid colors.

DASH puts a spin on the traditional noir tale, keeping the aesthetic (complete with gritty '40s setting and the femme fatale), but ditching the world-weary hardboiled detective in favor of a trope-busting protagonist. It's great to see more LGBT visibility in genres that don't normally feature diverse casts, and it'll be interesting to see how this narrative develops. 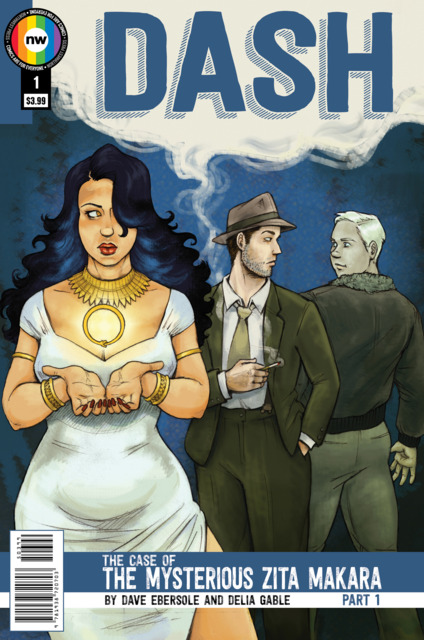