Vader now stands at the precipice. The slightest wrong move will spell his end before the Emperor and his newly assembled band of technological freaks.

After the shocking reveal of last issue, Darth Vader comes face-to-face with his master’s secret project, as well as the man himself. But he has no time to reflect or take it all in as the Emperor immediately declares a quick demonstration against his greatest disciple. What follows is a chaotic, pitched battle that leaves many dead and many questions still to answer. The issue then slows quite a bit for a conversation borne out of necessity and rage as well as a final twisting of the knife in Vader’s gut by issue’s end. Kieron Gillen wraps up what has been an excellent run redefining the dark lord of the Sith from his original role as enforcer and thug to Grand Moff Tarkin to fallen knight stripped of rank and title serving darkness. Gillen always leaned more to the latter, which is fine as that’s the one that feels more true to the core of what the character later became. The dialog here is, as always, his strongest suit when the two main characters converse. It feels like words and conversations left out of the source material, a task that’s incredibly difficult to accomplish as a secondhand writer to pre-established characters.

Salvador Larocca’s linework is super-detailed with thin outlines that create a sense of almost realism. With one notable exception, the visuals and body language of the characters do most of the heavy lifting in what has turned out to be a very conversation-heavy issue. Larocca still manages to convey an absolute metric TON of emotional subtlety from a man covered head-to-toe in armor and wearing an unmoving mask. There are lots of little ticks and details that manage to communicate to the audience the absolutely seething frustration and malice underneath all of Vader’s mechanized equipment. Edgar Delgado’s colors really stand out this issue, and that’s to take nothing away from his previous work, and part of that is the bizarre diversity of the characters. From genetically modified trandoshan to mon cal cyborg to droid swarm-wielding tech wizard, there’s a lot to render here and a lot of different colors to use. Delgado makes each one look and feel unique and real while ensuring that the world is just as dynamic as the people in it.

This issue opens with what should be an absolute knock-down, drag-out brawl but comes off more as an old-school videogame’s boss rush where each enemy comes at you one at a time. It all winds up feeling too chaotic when it’s simply one-on-one and then too ordered when the proper brawl breaks out. The whole thing comes off as very counterintuitive and the conclusion of it is also something of a head-scratcher.

It’s a rare stumble in what is otherwise a fantastic issue. It’s always interesting when a creative team effectively reminds the reader that Darth Vader was the same person as Anakin Skywalker from the prequels. It’s surprisingly easy to view those as totally separate movies, and Gillen and Larocca are excellent at giving glimpses, in the form of brief flashbacks, to Vader’s past. And, of course, when news of his present reaches him, the book reaches a wonderful fever pitch of intensely satisfying emotional moments culminating with a giant question mark practically begging to see what’s next. 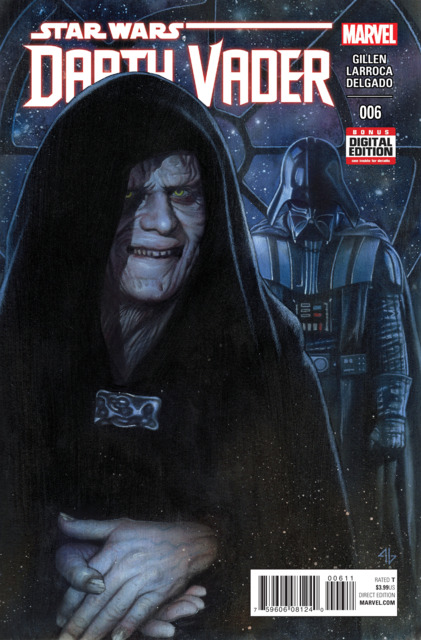