The Dark Lord of the Sith finally closes in on what he’s been scheming toward.

After assembling a droid army, sending a pair of bounty hunters at various targets and picking up an ally or three, Darth Vader finally makes his move. What he discovers MIGHT be the most significant edition to the non-movie Star Wars universe yet seen as it has titanic implications for the past and future of the universe. Kieron Gillen gives us just enough of the supporting characters while focusing this issue squarely back on the guy whose name is in the title: this is Vader’s time to retake the spotlight, but Aphra and the two droids still get plenty of great moments. This is a good idea as Aphra was slowly becoming dangerously near too much too soon territory with her tendency toward ranting/babbling. Gillen pulls back on that and it ensures that the character remains one whose presence in the title is welcome. The same goes for the pair of droids, who could easily be reduced to gimmicks with too much exposure. Vader’s ruthless methods are on full display here as well as making great use of his specific characteristics. It’s a hallmark of a great title when the character uses strategies that no one else could.

Salvador Larroca’s linework is to its usual fantastic standard and he’s given a real chance to stretch his creative muscles here. The concepts that are introduced are at once beautiful, bizarre and horrific, and Larroca threads the needle on all of that while still ensuring the reader not get lost or the action be too unclear. As usual, Vader is a walking tank that lets the battle come to him. Larroca emphasizes his role as a frontline general with brutal efficiency while Edgar Delgado’s colors paint a picture of dark, brooding intent. The color palette in this issue is saturated and dank, juxtaposing the outwardly beautiful setting and emphasizing the abominable true nature of it.

There’s a reveal near the end of the issue (right before another, far more amazing one) that loses a lot of its punch because it features one of the new characters that hasn’t been all that well established. Without giving too much away, the character’s exit didn’t mean a great deal, so their re-entrance means even less. Everything around the character is interesting, but the core is missing and it deflates a lot of the impact as this had been building since issue 1.

The second reveal at the end of the issue is shocking enough to render the first almost irrelevant, but this is still a solid, great issue featuring some amazing action and even a few chuckles. Unless the ball is entirely dropped next issue, this storyline will have been one of the best, if not the best, in Darth Vader’s comic book story history. The combination of character development, power utilization and great new characters have all been building to this issue, and while the payoff is a little uneven, it still feels like the journey has been worth it. 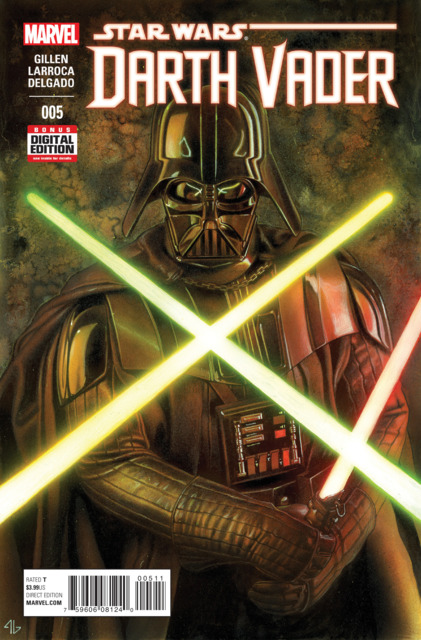