Vader’s looking for a little backup. But who can he trust not to spill his secrets the first chance they get? Who...or what?

Give these new Marvel Star Wars comics all the credit in the world: they are coming up with new characters that fit snugly into one of the MOST established universes seamlessly. We’ve already caught our first glimpse of a new Wookie bounty hunter, and now we get a wild archaeologist and her...unusual droids. This issue opens not on the dark lord of the sith, but said archaeologist by the name of Doctor Aphra as she makes her way past her own temple of ill-omen to procure a piece of equipment that will change everything for a couple of droids in her possession. After some terrific banter and the usual amazing action that this series has gotten us used to, she finds herself in the employ of Vader. Kieron Gillen injects this new character with so much personality that it feels like she’s a known quantity within a few pages, and that’s meant to be a compliment. Not because she’s terribly predictable, but because she seems so fleshed-out already that everything she does comes off as extremely organic and real. It’s also interesting being introduced to a character who, if she were in one of the old Knights of the Old Republic games, though possessing no Force powers, would clearly be Darkside aligned. But unlike so many other Darkside characters from the main Star Wars tales, she’s not a maniacal monster, she's simply out for her own benefit and with an uncaring, cavalier attitude about others. She’s a character that desperately needs her own spin-off.

Salvador Larroca’s linework in this issue is great, and with an issue like this it really, really needs to be. From the fantastic, trap-dodging opening to Vader’s simple, direct combat and the wandering, fascinating dialog aboard Aphra’s ship. Larroca blocks, plans and paces everything with a wonderful skill and Gillen smartly lets the visuals tell the story when the action needs to get frantic, letting the reader’s eye scan the page at the speed that the action occurs. Edgar Delgado’s colors are more staid and subdued this issue, in stark contrast the harsh lighting of both Imperial ships and Tatooine, but it works well to give the issue a more mellow, though often threatening, tone.

There are a great many derivatives in this issue from Doctor Aphra herself (though one line in particular was referential in a delightful way) to the droids she awakens all feel like well-trod ground, even within previous Star Wars stories. It’s understandable that those are no longer “canon,” but they still exist and this feels like it bites a bit much from them.

The issues themselves are becoming formulaic as well. The cast of characters changes all the time, but we’ve gotten three issues with very similar arcs and beats for each one, and while this series is ongoing, seeing this kind of repetition isn't good.

The formula this issue follows is still an effective one, and here’s to hoping that this isn’t Doctor Aphra, or her droids, sole appearances in this new, exciting Star Wars Universe. They may not be the most original of characters, but that doesn’t mean they’re not any fun, and this issue does a great job introducing them to us. Vader’s goals are becoming grander and grander, and it’s going to be interesting to see how this ties back into the Original Trilogy (if at all) or how he keeps it all under wraps. 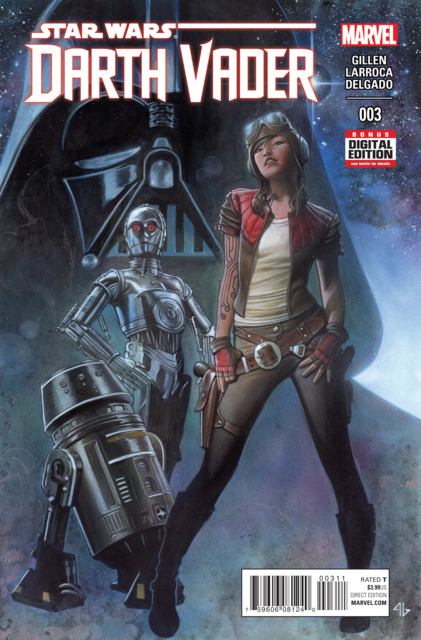