Vader continues the search for his son.

Darth Vader has taken down a fleet of Rebels and is closer to finding his son. Han and Leia try to find a way to help.

First and foremost, this is only the second part of this crossover but it feels like it has a great cohesiveness between VADER DOWN and this issue of DARTH VADER. Both books have a completely different creative team, but the flow between the two issues is perfect. Normally, within crossover events, we don't get something this smooth. The transition between issues is near seamless. Writer Kieron Gillen has such a great handle on the characters in this world and how they fit into the larger story.

Part one of this event had some pretty phenomenal fight scenes. That continues in this issue as well. This story pretty much shows that Darth Vader is someone you don't want to mess with. He doesn't hold back in order to get what he wants and "mercy" is not a word in his vocabulary. The same goes for his companions Aphra and 000, the protocol droid.

This issue has a pretty nuts ending, which we won't spoil, but it adds a lot to where the story is going. Most of the issue is Vader searching for his son, which he doesn't really find, and Han Solo and Leia trying to figure out a way to help Luke, so there's a bit of dragging, but the ending really raises the bar for the story and where it's going to go from here.

On the artistic side of things, this book looks great. Artist Salvador Larroca and colorist Edgar Delgado capture these characters exceptionally well. Larroca does a stellar job at capturing the character's facial expressions during pivotal moments in the story. Delgado's color choices give this book a darker undertone, which is the perfect fit for the story.

Vader Down is two issues in but is an incredibly promising story that is the perfect fit for the timeline this all takes place in. Gillen, Larroca, and Delgado are doing a great job with the story, and while the story does drag a tiny bit, the overall issue is a must-read for Star Wars fans. If you've been enjoying what Marvel has been doing with this franchise, then you need to pick up this crossover. 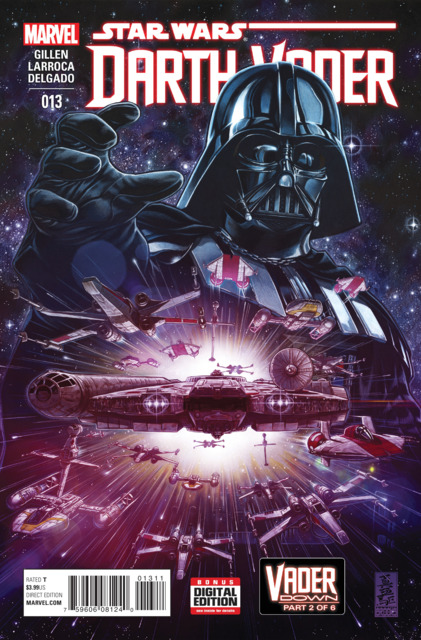