After the events of DAREDEVIL #36, Matt Murdock is taking a road trip to his new home. Except he's not going by road.

This marks another new digital Infinite Comic from Marvel. Just as DEADPOOL : THE GAUNTLET is meant to give us some background on an upcoming story in the main series, this Daredevil series will fill us in on what happens between DAREDEVIL #36 and the upcoming All-New Marvel NOW! relaunch.

Matt Murdock's life is changing in big ways. His status quo has been altered and life as he knew it has ended. Making his way to San Francisco (for reasons explained in DAREDEVIL #36), Matt is about to start a new direction with the help of a member of his supporting cast.

We did sort of see Matt go on a road trip after the crazy events of Shadowland in DAREDEVIL: REBORN. What Mark Waid does to make this different from your typical comic book road trip story is the manner of transportation Matt takes. It allows for a fascinating experience I don't recall seeing Daredevil take part in before. I could be wrong. There's a couple really cool moments showing how Matt deals with situations due to his enhanced senses.

I've been looking forward to Peter Krause's art since it was announced he'd be on this series. He captures the essence of both Matt Murdock and Daredevil in both action and civilian scenes. John Kalisz's color follow what we're used to in the last series but there are also some moments where they're a little muted and it looks really nice.

There was a slightly confusing transition from the action in the first scene to when Matt arrives on his mode of transportation. For a second I thought he jumped in through the window of a bus.

Matt's road trip takes a little detour. The reason why felt a little odd but I don't know how often weather can cause such a detour. The results of the detour will make an interesting segue way in the upcoming chapters.

It is an Infinite Comic but it felt a little short. I dig the format but sometimes it feels like issues fly by.

Daredevil is facing some big changes in life. Before he arrives in his new hometown of San Francisco, Mark Waid and Peter Krause are taking Matt and a friend on a road trip, of sorts, across the country. With this being Mark Waid behind the wheel, of course it won't be your typical road trip. This first chapter sets up the story while also reminding new and old readers who Matt is and what he can do. Krause's art is great and it's always fun to see different artists add their mark to a character. Waid puts Daredevil in a different situation and we're left with a very nice cliffhanger to make us come back for the next chapter. If you've been loving Waid's DAREDEVIL, you really need to check this series out before the new one begins. 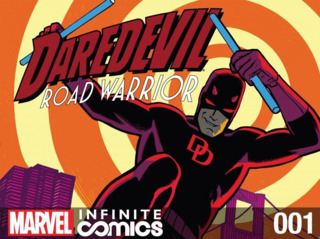