"Mapone." This is the final issue. Will all the answers be revealed? This has been such a sad story yet it's been so amazingly good.

This is it what it all comes down to. In this series we saw the final days of Daredevil. Moments before his horrific death, he uttered one single word, "Mapone." Ben Urich discovered this and made it his mission to discover the meaning of his dead friend's final word. This mission has taken him all over the future New York City in the Marvel Universe. We've seen many friends and foes of Daredevil and have discovered many subtle facts about what's potentially to come. It hasn't been a happy story at all but despite this, it's been so great.

This shows what Brian Michael Bendis and David Mack are capable of. We've seen many truly great Daredevil stories over the years and this ranks up there with the best. Let it be said, this is not the feel good story of the year. It's hard to believe you can have a series continue where main characters perish. For a series with DAREDEVIL in the title, it goes way beyond that. This is about him, his life and what he's left behind. Bendis and Mack do a great job of defining who Daredevil is and was and will be.

The art is a visual treat as well. The entire series has had Klaus Janson doing pencils and Bill Sienkiewicz doing finished art. There are also painted sequences by David Mack. Those that have read many of my reviews know I have problems when there is more than one art style in the same issue. That is absolutely not a problem here. It works nicely and perfectly. The differences in the art makes sense. It actually enhances the storytelling but separating the different points in the story.

Nothing bad - except that the series is over.

This has been and will be one of my favorite miniseries of the year and the year isn't even half way over. We've seen many great Daredevil stories and we can now add END OF DAYS to that list. Brian Michael Bendis and David Mack make a great team in deliver this dour tale of Matt Murdock's last day and beyond. It's a heavy story that isn't too cheerful. But what the story represents and how it is told makes this worth reading and re-reading. The art team of Klaus Janson, Bill Sienkiewicz and David Mack make it all even better. It is sad that the story is over but you can't deny how great it's been reading it all. 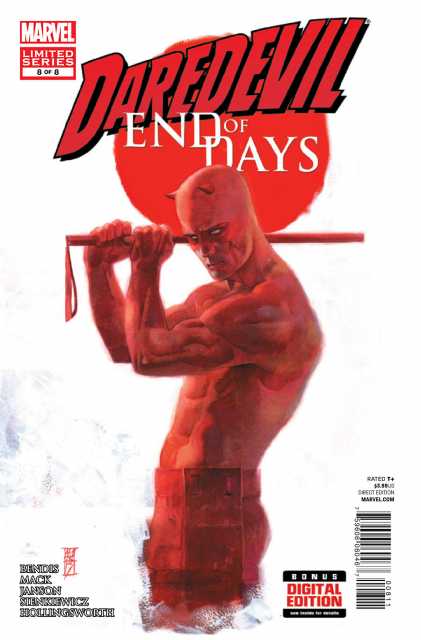