Whatever happened to the Devil’s best friend?

It’s been one of the most burning questions since the shocking reveal at the end of DAREDEVIL #1: exactly what happened to Foggy Nelson? This issue reveals exactly what in a total flashback that also displays the friendship that Murdock and Nelson share in a way that’s both incredibly frank and adorably whimsical. There’s often the question asked about why any “normal” person would want to associate with a superhero. Friendship before whatever caused the hero to take up their mantles is a frequent contributor, but after a certain point being thrown off things by a maniac in a bad Halloween costume might begin to outweigh even the closest friendships, but Mark Waid continues making his book an amazing character study and gives us the exact reason that Foggy has endured, even unto his death. Despite the fact that it’s got giant, mechanized robots, size-changing supermen, and a ploy that might come off as absurd, this is an incredibly heartfelt, character-driven issue. We get to really peer under the hood of one of the longest, most consistent friendships in comic books today, particularly where one party KNOWS the other’s identity. And it MAKES SENSE.

Chris Samnee, who shares a Storyteller credit with Mark Waid again, has a beautiful simplicity to his visual style, making it look easy with a style impossible to copy. His facial expressions are absolutely top-notch, particularly the first look at Foggy we get in the issue, but he doesn’t stop there. There’s a reason Samnee remains an artist on the tip of so many tongues, he’s not only timely but lends a tremendous sense of detail to visuals that, at first, look like they’d be easy. Making something complicated look easy is the mark of incredible skill, however, and when the action breaks out, we get not only great emotional content, but some amazing action with an organic flow from one panel to the next, making the issue seem almost animated. Javier Rodriguez continues his incredible run on the colors of this book, making everything understated, simple and absolutely beautiful. Much like the visuals, Rodriguez’s colors at first appear simple, but if the reader takes the time to really absorb them, they perfectly compliment Samnee’s aesthetic, and vice-versa.

There’s really not much to dislike here. How much Daredevil winds up planning in the end is a little ambiguous, and that can color the story one way or another, but it’s just as easy to see either argument and, in the end, it’s not really what the story is about anyway.

This story is incredibly heartfelt and stands as a great example of how backfilling can actually, greatly benefit a story. This was a great, lingering question and the answer didn’t disappoint, but it also served to make the current storyline stronger. It’s always a good idea to introduce these “slice of life” stories about the people in superhero’s lives to keep them and their stories grounded and at least a bit relatable, but it can be risky because they tend not to be as exciting or thrilling as a more common story. Waid and Samnee have both indulged in and dodged that pitfall by making Daredevil integral to the issue, but making the core of the story one between Matt and Foggy. 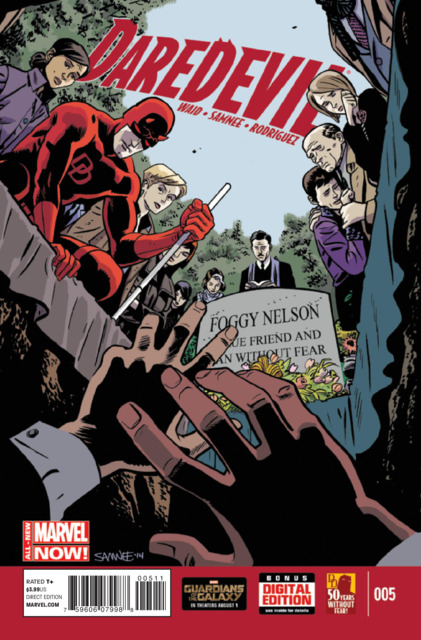