Daredevil #36 - I Am Daredevil

You've often heard "this issue changes everything." Well, this issue DOES change everything for Daredevil.

Matt Murdock dropped quite a bombshell in court in the last issue. It was a crazy move and we find out his reasoning here. To say this will change things for Matt Murdock is an understatement. The Sons of the Serpent put Matt in a tough situation and now there will be repercussions to deal with.

As the final issue to this volume, it does a great job wrapping things up. We get to see Matt Murdock in court as well as plenty of Daredevil action. We may know where Matt's going after this due to the way comic book solicitations work but the big question is why? There's also the question of whether or not those close to Matt will actually survive this issue. Mark Waid continues to show he has a great understanding for Matt Murdock and Daredevil. It may be the end of this volume but it also marks the beginning of a new chapter.

How great is it to have Chris Samnee perform the art duties for this farewell? Javier Rodriguez's colors amplify the action and makes each panel jump off the page. You'll definitely want to go back and look over each page after you read the issue. During your first reading, you'll be on the edge of your seat, waiting to see what happens next. Taking time to appreciate each panel is like getting an extra helping of dessert after you've read it all.

There isn't really anything to complain about. It still feels unnecessary for this series to "end" only to get relaunched shortly. We have an idea where Matt is going next because of the solicits for the next volume. But this is still a fun and great issue.

This is the end of DAREDEVIL. Or at least it's the end of this volume. Things are about to change in big ways for Matt Murdock. You will definitely want to see what happens before the new series lands in March. Mark Waid continues his magnificent run. While this may be the end of the volume, we know there's plenty more coming from Waid, Samnee and Rodriguez. The art, colors, and action are top notch here. We can always expect DAREDEVIL to provide plenty of fun and action. What more could you ask for? 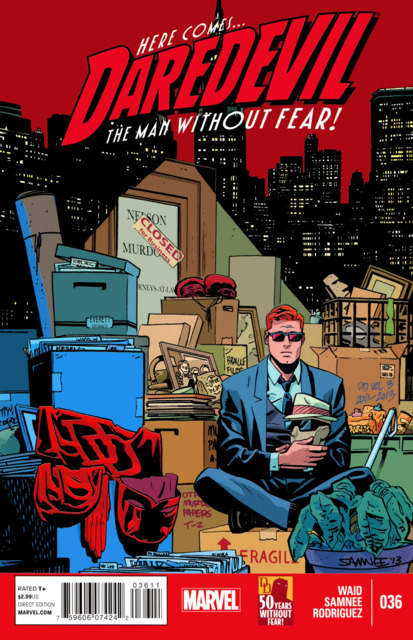