Last issue Matt Murdock received some dire news. How far will he go to do the right thing?

This volume of DAREDEVIL may be coming to a close but you definitely feel the weight coming down in this issue. Matt Murdock's best friend, Foggy Nelson, is fighting for his life and it's easy to think everything will somehow work out for the best because we're talking 'comic books' here. We've seen characters overcome incredible odds but we also know Mark Waid doesn't take the easy way while telling a story.

Daredevil's fight against the Sons of the Serpent takes a twisted turn as he finds himself in quite a dilemma. He wants nothing more than to take them down but there is a lot more at stake. This truly could mean the end of things as we know them for DAREDEVIL.

Mark Waid really puts Daredevil in a sticky situation. It's a matter where he really needs to consider the consequences of his actions. While things have had a slightly light-hearted tone, the way he's handled his dual identities is coming into play once again in a big way. Along the way, we see the return of Elektra as Matt tries to figure out what his next step should be. It's always great when the history of characters is honored, even if it's not the main focus of the story.

Chris Samnee and Javier Rodriguez do an amazing job with the art and colors. It's almost hard to remember what past art styles we've seen with Daredevil as the vibe in this series has been consistent and top notch. You can't help but want more.

The ending is pretty crazy. You'll say to your comic, "Mark Waid, what are you doing?"

The issue feels like it jumps forward a little quickly. We know the end is coming and that could be part of it. Matt's in the hospital then fighting alongside Elektra and then in court. The scene with Elektra felt a little sparse but still very cool.

Mark Waid has been doing great things with Daredevil. Now as the story nears its conclusion, you're almost a little afraid with a sick feeling in your stomach when you think of what might happen next. Chris Samnee and Javier Rodriguez add a great vibe to the story and you'll find yourself staring at individual panels when you find you can't resist reading the comic all over again. Don't miss out on this issue because things are about to change big time for Daredevil. 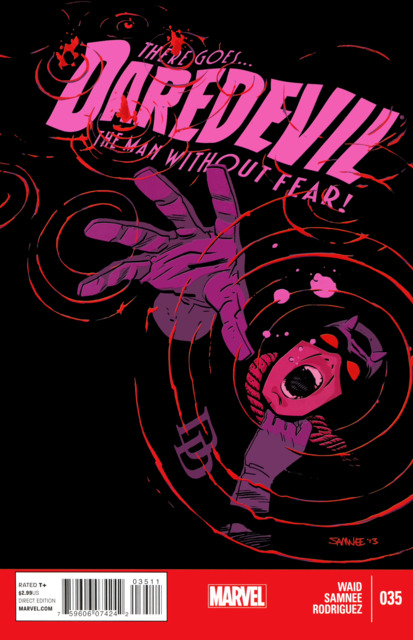