Daredevil has faced many different villains in his career but what he has to deal with in this issue will definitely keep him busy.

Mark Waid is absolutely on a roll with this series. Simply put, if you've been enjoying this series, you are going to love this issue. We get some follow up with Foggy dealing with cancer as well as a little more on Matt's new coworker and former flame, Kirsten McDuffie. The main threat is one you might not expect.

Waid takes a slightly different approach in this issue. Rather than have Daredevil face off against some big huge threat, we see a more realistic problem. It's amazing how a simple attack could have such disastrous results. Seeing Daredevil attempt to deal with it gave the story a fresh feel. We've seen Daredevil exchange blows with villains before and this was a great change of pace. Waid also incorporates seeds from the previous stories and the mention of Sons of the Serpent is a great way to carry the story forward as well as calling back to what we've just seen. And more Hank Pym is always a good thing.

Chris Samnee's art and Javier Rodriguez's colors makes a scene of Matt and others just watching the news look good. There's just no denying how good this all looks. You can't help but want more.

Waid gives us another interesting adventure that continues to set his series apart from past ones. With Samnee and Rodriguez, this is just an enjoyable comic.

Daredevil has seen many things and Mark Waid has made him face several different threats but this time it's a little different. Waid takes an average villain and pushes him in an interesting direction which manages to catch Daredevil off guard. With Chris Samnee's art and Javier Rodriguez's colors, this comic is the complete package. It's a great time to be a Daredevil fan. 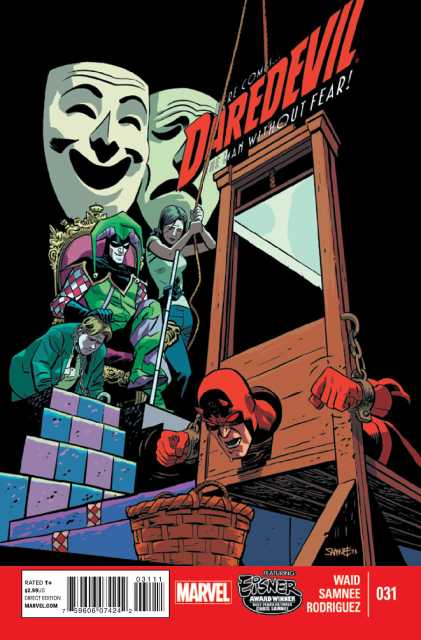