Month after month, Mark Waid continues to make DAREDEVIL such a great and fun series. While we're still recovering from the big epic overlaying story, things get a little cosmic in this issue.

Think about all the Daredevil stories you've seen. They've all sort of had a somewhat similar theme or tone. At least in terms of the scope. Daredevil is a street-level character. We may have had some slight mysticism with the Hand and such but Mark Waid definitely gives us something different here. Daredevil meets an alien which leads to the Silver Surfer showing up. Not quite what you would expect in a Daredevil comic.

With the style Waid is so good at, we get quite a bit of humor mixed into a story that can be taken completely serious. Matt Murdock has had some interesting clients walk through his office but you would never expect an alien to call upon him. Yet Waid makes it work.

This "different" type of story opens up a new door for Daredevil. We get to see him compensate in order to deal with a creature that doesn't quite register upon his senses like others do. Involving Silver Surfer also allows us to see him in a different way as well. It might have seemed a little crazy at first but the results are being able to witness other aspects of both Daredevil and Silver Surfer's characters.

This issue also marks the return of Chris Samnee on the interior art. Javier Rodriguez has been doing a great job and is still on hand to do his thing with the color. Seeing the art and color along with Waid's script makes this something almost magical.

Aside from one development, this almost feels like a filler issue. Albeit a rather fun one. We might be a little spoiled with the long-running story and mystery Waid crafted in the first twenty-something issues. Having a self-contained story is great but with this one-off meeting with Silver Surfer, things immediately return to the status quo by the end. You'll enjoy reading the issue but there isn't anything extremely crucial.

Daredevil and Silver Surfer is a pairing you would think could never work. Yet, of course, Mark Waid does make it work. In what almost starts out as borderline absurdity, we get to see a story that allows a closer look at both characters. We've seen many stories with the same characters over the years so this truly gives us something different with Daredevil. Chris Samnee's art and Javier Rodriguez's colors are extraordinary as usual. The issue may not be earth-shattering in DD's little corner of the Marvel Universe but without a doubt, this is a fun-filled issue. What else would we expect from this series? 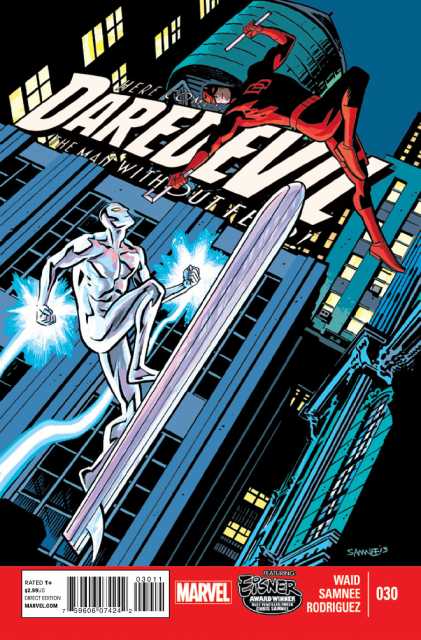