Last issue gave us an interesting look at Matt Murdock's childhood when a former bully paid him a visit, asking for help against the Sons of the Serpent. What seemed like a normal court case with Murdock simply consulting turned into a deadly situation when it was revealed that the Society had agents all over the place.

We've seen many Daredevil fights but this one had a great change of pace feel. Rather than being set out in the city, it all takes place within a court building. This means hallways, stairways and other rooms contained the action. We've also seen Daredevil face off against big incredible threats but while the threat here isn't one to take lightly, it's a great way to pull back with a different type of "villain" without cutting corners in terms of the storytelling.

Javier Rodriguez's art and colors is, once again, perfectly fitting for this title. In other words, that means it's top notch. There have been so many great artists on this title and it's so good seeing the vibe and tradition continue.

There were some really great aspects to this issue. It was a good change of pace seeing DD up against a different type of enemy but after all epic issues we had, this was almost like a chance to catch our breath. Either the "villains" were very gutsy or they didn't fully think their plan through. There were some extreme actions taken by them out in the open (of the courthouse) and lots of pretty big risks.

Each issue of Mark Waid's DAREDEVIL proves to be fun and entertaining. After all the craziness DD's been going through, we get a slightly calmer scenario in this story. That doesn't mean it's not as exciting, it just feels toned down a little. It's a good way for Daredevil and us to catch our breaths. Javier Rodriguez's art and colors carries on the tradition that we've been used to in this series. If nothing else, Mark Waid and Marvel have been spoiling us with this series. We also get a nice set up for future possible stories, an intriguing cliffhanger and a surprising guest for the next issue. 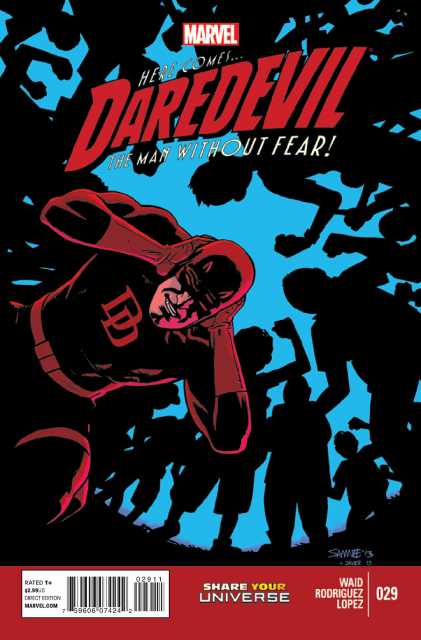