For an issue that is less focused on the superhero side of Matt Murdock's life, Mark Waid continues to show how great he can make this series.

Here we go again. Hurray for Mark Waid. What more is there to say?

After all the craziness in the past...many issues, Mark Waid eases back a little on the threats and dangers in Matt Murdock's life. But (thankfully) that doesn't mean he's cutting back on the quality of the storytelling.

For as much action and suspense the previous issues have had, Waid really leans on the emotional side of things, but not in a tearjerker way. Whether it's Matt visiting Foggy in the hospital as he fights his own battle or dealing with a childhood bully, we get to see a different sort of fight for Matt. It's this sort of variation that makes the series intriguing and have a fresh feeling. Just because this is a superhero comic doesn't mean it has to be full of superhero action. Waid gives us a great visit down Matt's childhood lane and it does make you look at him just a tiny bit differently. At the same time, it also reinforces just how noble and heroic Matt is.

There was some concern over last issue being the last with Chris Samnee. Javier Rodriguez (who has colored several issues) does an extraordinary job and keeps up the tradition of top notch art (and color) this series has had from the beginning. It's one thing for a comic book artist to be able to draw a superhero comic. This shows Rodriguez's skills in drawing actual people along with the emotions conveyed in the different situations throughout the story.

It's another great issue. Perhaps a tiny bit less action that some might like but it's still a compelling and completely satisfying issue.

Can this series do no wrong? It's always a wonderful treat when a writer mixes things up and gives an issue with a completely different feel over the previous one. The focus switches from action to emotion and character development but that doesn't take away from the spectacle this comic is. It's no secret how versatile a writer Mark Waid is and month after month he continues to show it. Javier Rodriguez picks up the art reigns and continues the tradition of the spectacular art we've been getting in this series. If you enjoy comics, you should be reading Mark Waid's DAREDEVIL. 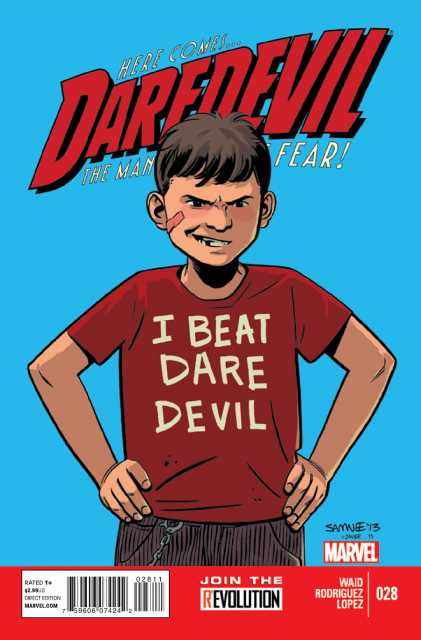