After a serious beating, Matt deduces the identity of the man who has been tormenting him.

As someone who has been consistently keeping up with DAREDEVIL and thoroughly enjoying the series I sometimes find it hard to believe that an already amazing series can become even better. That is exactly the case with this particular issue. Just when I thought things could not get more interesting and exciting, Waid knocks it out of the park with DAREDEVIL #26.

Who is the man behind the mask thinking and plotting ways of destroying Daredevil's life? Who has hired assassin's to give him the run of his life, break him psychologically in order to cripple him emotionally and physically? It is in this issue that we find the answer to that question and finally uncover the man responsible for giving Matt the hell he has been forced to endure.

Even though Waid gives us many of the answers we have been searching for in this issue, he maintains a certain momentum and constructs a story that is bound to keep readers of this series at the very edge of their seats. The result is a fantastic tale that is truly thrilling and believable because what happens here has been a long time coming.

We get everything in this comic: from a glimpse at the importance of the relationship (once again) between Matt and Foggy, to the mental break-down of Matt. It's excitement not only on a physical level for this character, but also a psychological one and that's what makes it awesome.

Pair Waid's incredible story-telling with the talents of Chris Samnee and Javier Rodriguez and we have a recipe for perfection.

There is really nothing bad about this issue: it is, in a word, brilliant.

Chris Samnee absolutely blew me away with this issue. Not only does he capture the expressions and emotions of these characters brilliantly, but the way he structures his panels is phenomenal. There is one page in particular that I found really impressive where he focused each panel on a piece and body part of the man behind Matt's torment, linking each individual panel with each word. The result is incredible and simply stunning.

Everything we see in this issue has been a long time coming, and it will be interesting to see whether or not Matt is right about the identity of his tormentor, or whether he is stuck in the wrong place at the worst time. While it would be easy to pick up this issue and follow the story along from here, I don't recommend. I think you would miss out on a lot of the beauty of this story by starting here.

This issue is definitely worth a read: it's a fantastic ride and I can't wait to see what the creative team has in store for these characters in issue #27. 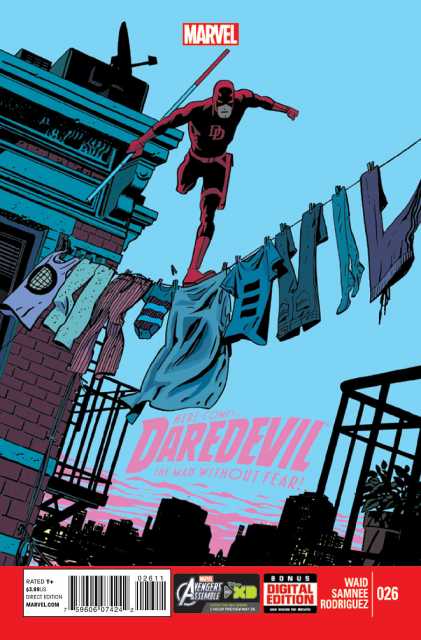