Has Daredevil met his match in Ikari?

If you've been following this series from at least its halfway point then you might feel as if this is the moment you have been anticipating. Matt is usually one step ahead of the game and the people around him, but not this time. The culmination of several issues lead up to this moment: the moment where Daredevil questions whether he really is one of a kind, whether he truly is a solid fighter, and whether or not he may have actually met his match. The story opens with Daredevil's interrogation of another character and moves quickly into an introduction to this new adversary. There are certain details (like the robe, for example) that are particularly striking, and very early on readers may definitely get the sense that there is someone else behind all of this from the beginning and that the adversary we see here isn't the one in control. By the time you reach the end of the issue it becomes obvious that here are bigger problems in store for Matt and things will only get worse before they get better, and that's fascinating.

If you are looking for action then look no further than this issue. This comic is absolutely jam-packed with non-stop action that will leave you guessing and rooting for Matt, and this is one of the few times that you may actually find yourself wondering whether or not the character will actually come out alive. The lead up to the final moments of this comic are totally overwhelming in the sense that they will leave you curious, asking yourself whether this is really the end of Matt Murdock and even more interested in the identity of the individual behind his torture. The result is very cool.

Artist Chris Samnee does a phenomenal job with the panel layout of this issue, capturing each and every strike, punch, grip and fighting stance in his panels. The execution of the action scenes in this comic are brilliant in the way that they capture every moment and as a result will really draw you into the story. The result is fantastic. This is an amazing issue.

Nothing bad here, this is definitely an issue that long-time readers of this series have been waiting for.

What I like about this series is the fact that Waid keeps you guessing; you never truly know what lies around the next corner with this series and that is something very evident in this particular comic. It is clear that DD may have met his match, but it is also clear that this new adversary (even without saying it explicitly) isn't the mastermind behind manipulating virtually everything in Matt's life as of late. It's interesting to see through the course of several issues the psychological breakdown of Murdock: this isn't just a physical adversary, this is someone who wants to make Matt feel fear. That's what makes this story so different and also so compelling. The art, as usual, is really lovely: Samnee's layouts and pencils really help to draw you into the story. This is a great read and not a bad starting point, although I would recommend picking up the previous few issues to really get a sense of how big Matt's problems really are. 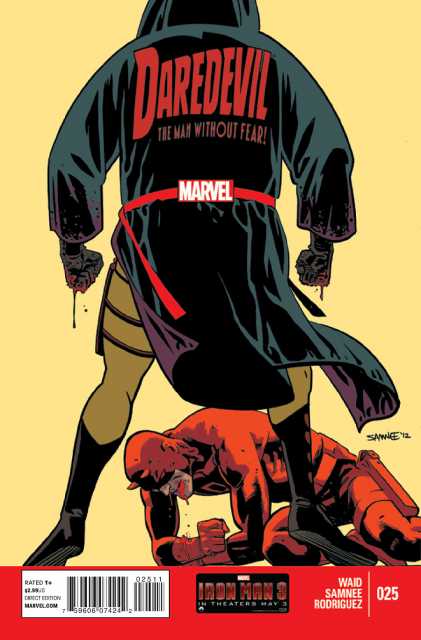