Daredevil’s sporting a brand-new look, and an attitude to match, as he makes his name known and presence felt across the Bay Area.

Things aren’t always what they seem, apparently. Rather than being at the heart of a new criminal endeavor, the Owl serves a much different role, the Shroud’s new motives are a mystery and there’s a new player in town with a very personal reason for seeking Owlsley out. All the while Daredevil’s gone about as public as he possibly can, not only outing himself but wearing a slick, practical new costume for work AND play. Chris Samnee, who’s got a storyteller credit as well as supplying the linework, has created a beautiful new suit (of the three-piece variety) that not only brings out the more Luciferian side of “the devil,” but seamlessly merges the roles of Matt Murdock and Daredevil, blurring the lines between the two even further. Mark Waid, sharing a storytelling credit with Samnee, gives us his usual razor-sharp dialog and gives us an overview of what, exactly, has been happening in the intervening time between last issue and this. Once everything is caught up, the issue proceeds at an excellent pace, showing a much happier Murdock who not only glad-hands the people he saves, but even seems to be able to show up to trial (mostly) on-time.

Samnee’s linework in this issue’s many, many action scenes is beautiful. From his pacing to his blocking to the new character design, everything looks fantastic and is presented in a way that’s easy to follow, but never overly simplistic. There’s a tremendous sense of impact and force behind every punch, kick, jump and everything else in the action, and the search for the Owl that follows it flows evenly from one page to the next. We also get some stellar color work from Matthew Wilson, making the bright spots their brightest and the dark spots cloaked in shadow and mystery. The tone that the visuals set up early on is a much more upbeat one, making the sudden downturn hit that much harder, but also feeling earned.

As great as the pacing gets once the issue catches the reader up, the stuff that happens before comes off as disjointed and even a little confusing. Obviously there’s a tease leading up to the big unveiling, but that combined with the jumping around with little indication of how much time has passed both since last issue, and even since the events within this issue, makes the proceedings lose some of their punch. It was difficult to ascertain how much this had become the new status quo because of the strange time passage.

As tricky as it was getting here, this issue feels like a fantastic new start for this character, only without any of the renumbering that so often comes with that. Samnee and Waid feel like they’re putting their unique stamp on DAREDEVIL, and it’s an audacious but highly, highly worthwhile one. While it’s unclear exactly how long this will last, it appears that the ride will absolutely be one that’s worth getting on and incredibly enjoyable. Here’s to hoping it sticks around for a good, long time. 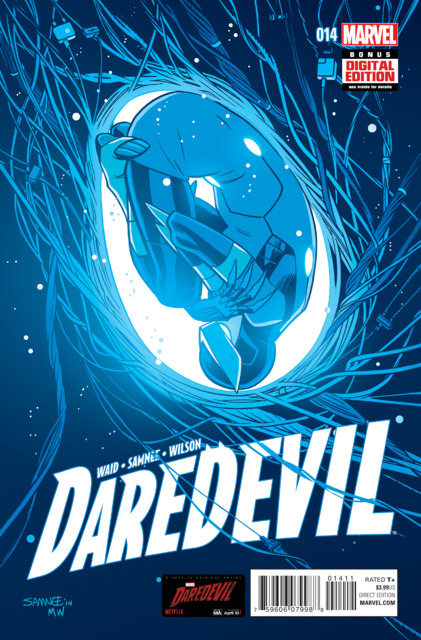