Charles Soule and Ron Garney bring Daredevil back to New York City with a new job and secret identity.

DAREDEVIL #1 is on sale Wednesday, December 2.

Matt Murdock is back. We've seen him go through many changes. Most recently his secret identity as Daredevil was made public and he had a law practice in San Francisco after having to leave New York City. Charles Soule and Ron Garney have come onto the title and Matt is back in New York City but while some things are the same, there's also some interesting differences.

With the All-New, All-Different Marvel titles, we have the convenient eight month gap since Secret Wars. In that time, Matt Murdock has moved back to New York City, started working with the District Attorney's Office, and found a new sidekick. Of course there's the big question of how can Matt Murdock be practicing law again in New York City since going public as being Daredevil cost him his law career. How Matt got to his point will be revealed. It's good for a series to have some mystery and questions for readers to sink their teeth into.

As much as I enjoyed Mark Waid, Chris Samnee, and Matt Wilson on the character, Soule, Garney, and Matt Milla are bringing some welcomed darkness back to Daredevil's life. There's a somber but intriguing vibe going on with the tones in the color. Each page really sucks you into the story.

When we see Daredevil in action, he doesn't mess around. He has an interesting new foe and it'll be interesting to see how he goes about his new job and why he made the change. It's always a joy to see different creative teams take on favorite characters. It's our chance to see the different aspects underneath the layers we might not have realized were there.

As fascinating as the changes are in the series, we are basically witnessing a set up. We're just getting a taste for what's to come here. It's a great taste but feels like just a warm up. Soule and Garney have set out to make this their own book and have succeeded. It's still the Daredevil we know. It's just a new chapter in his life. We have some questions as to what has happened since we last saw him but that's part of the intrigue in a new title. You can see Matt Murdock is focusing on a different sort of fight and it's going to be fun to watch how things unfold. It is absolutely a great time to be a Daredevil fan. 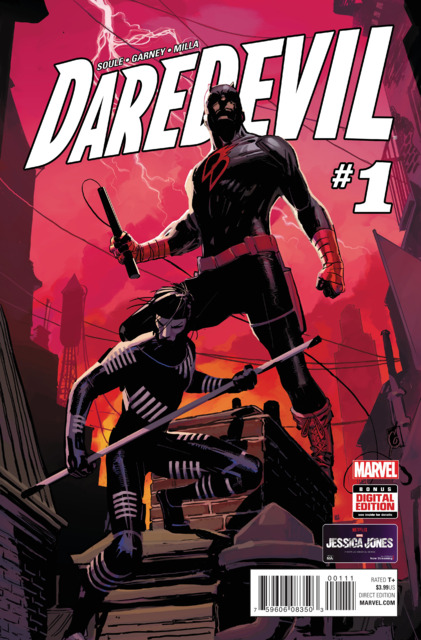