Daredevil arrives in his new hometown. Before he gets a chance to “see” the sights, he finds himself in the middle of a strange case.

Every so often, we see characters head off in new directions. With the life-changing decision Matt Murdock was forced to make, he has left New York City and is now in San Francisco. One of the immediate joys to see is the fact that Daredevil, while briefly resided here before, is not completely familiar with every square inch of the city, as he was with NYC. There have been times, in other comics, where a character ends up in a different city and you wouldn’t know if it if it wasn’t for a caption or mention. Mark Waid and Chris Samnee make it clear that this is now DD in San Francisco.

The story opens, not with Matt acting as a lawyer, but more as a detective, in a way. This is a fascinating aspect of Daredevil’s powers. He would be a brilliant crime scene investigator. We’ve caught the occasional glimpse of Matt using his powers to find clues but we get a fun scene seeing how Matt can fully analyze all the clues.

What do we get for his first case back in San Francisco? It starts off as a simple one but Waid quickly turns the tables on Daredevil and the readers. There ends up being more to it than was thought and seeing Daredevil quick on his feet is pretty cool. Of course he gets some help as well. This is a little odd at first but it’s a sign of maturity on Matt’s part, being willing and able to ask for help rather than try to do it all completely on his own.

Chris Samnee’s art is brilliant, as usual. Working in San Francisco, it’s nice to be able to recognize some landmarks in the comics. As mentioned before, we’ve often seen ‘generic comic book city’ simply slapped with the name of the city it’s meant to be. We don’t usually see Daredevil in the middle of a chase and we get a really fun action packed sequence here. Javier Rodriguez's color makes it all vibrant and also gives a familiar feel to the last volume, despite Daredevil now being in a new city.

And how about that last page, huh?

Sometimes it’s a little weird thinking back to where Daredevil used to be. This is meant more emotionally rather than a physical location. Mark Waid’s Daredevil definitely is more upbeat than the Daredevil some may want. This is a sign of emotional growth, in some ways. Also, it’s not like we need another dark and brooding superhero running around. In other words, I have no complaints here. It’s a really enjoyable book.

It’s another All-New Marvel NOW! success. It may be a new #1 but if you’ve been reading Mark Waid and Chris Samnee’s DAREDEVIL before, you know exactly what you’ll be getting here. Although, with Daredevil now in San Francisco, he’ll have some new problems to deal with. We’re off to a great start, but then again, Waid and Samnee have been working on DAREDEVIL for a while so it should not be a surprise how much you’ll love this issue. New York City is a great city but it’s going to be really refreshing to see some action in a new city. The fact that it happens to be San Francisco is just a huge coincidence. 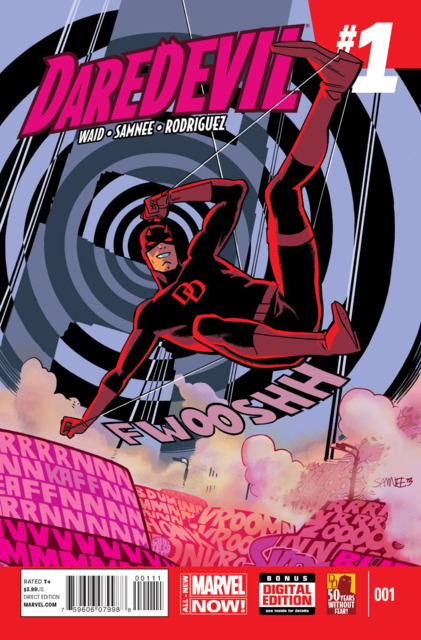