Batman is dead and Damian is on the warpath. But then what the heck did last issue's final page mean?

It's great to see Damian Wayne again. In some ways it's a little difficult seeing Damian, slightly older, since his death. This issue shows us the potential the character could have had if he survived and comic book time allowed him to age a little.

The crux of the story explores the notion of heroes dealing with the death of a fellow crime-fighting partner. With Damian, there's always been the struggle between his two lives with mother and father. When the worst thing happens and guilt sets in, we see that Damian can only deal with it in the way his instincts tell him to.

There were some minor slight odd things with the opening of the first issue. The interaction between Batman and Robin felt a little strange in the moment before Batman's death. We do get some answers here as well as what the last page of the first issue meant. Seeing the beginning of the next stage for Damian is something we've wanted to see for some time.

The art is great. You feel pulled in and you take in all the details. You can almost feel each punch. Seeing this time period for Gotham is pretty cool. The more you see, the more you want to see.

There's more confusion in this issue. The immediate question I had was with the individual Damian is confronted with in the first few pages. Without spoiling, the character is a familiar one but has gone completely gray. How much older is Damian? I didn't think that much time had gone by. Alfred is still alive and kicking and apparently hasn't aged. There is something with the priest Damian talks to. I feel like I'm supposed to know who he is. Am I just completely missing something?

It's great seeing Damian progress but parts of the story felt a little...sporadic. But there's no way I can look away.

More Damian is what we want and this is where we're getting it. There may be some head-scratching moments but seeing Damian move forward to becoming Batman is a cool thing and Andy Kubert's art makes this enjoyable. While we do get some answers about the first issue, there are more that pop up here. It may be a matter of just sitting back and enjoying the adventure but you can't help but wonder how the big picture will turn out. If you're a fan of Damian, you'll want to watch as he enters the next stage of his 'career.' 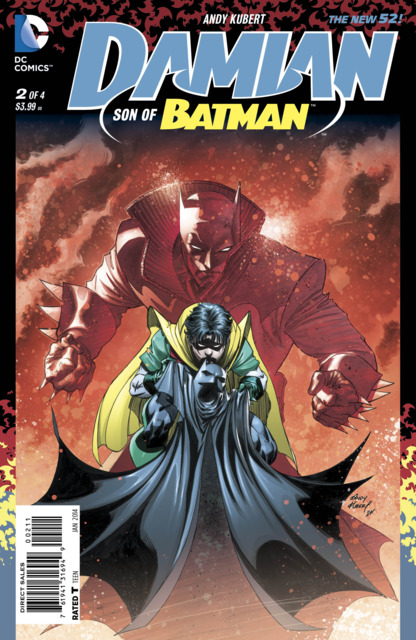