This is the moment we've been waiting for - the turning point for Damian Wayne. Andy Kubert reminds us who Damian is and where he came from while setting him up for the next chapter in his life.

Damian Wayne was the character many of us wanted to hate. He was arrogant, stubborn and a bit annoying at time. But the little guy soon won us over. Along the way, we occasionally saw a different side to his outlook on things. With his death, we've been left missing this great character.

One of the great things about Damian in comics is the idea of his possible future. We've seen and relished the stories where he grows up and takes over the mantle of the Bat in a more violent nature. We've caught glimpses as to how and why this happened. This is the story that fleshes that out more.

In a future that may or may not happen (yes, he's dead but this is comic books), we get to see a slightly older Robin along side Batman. You'll hang onto every word of their exchange to try to pick up clues as to what their relationship and the world around them is like. Andy Kubert does a great job in fleshing out this time period and the art is exactly what you'd want and expect. Kubert has the ability to capture the mood and emotion in scenes, even when characters are wearing masks.

We're off to a good start and with the crazy ending and mysteries being built up, you'll definitely come back for more. Next issue looks to be pretty insane!

I wish this was a six-issue miniseries instead of a four-issue one.

While I'll take a Damian story any way I can get it, it would have been nice if this story was released before recent events in BATMAN INCORPORATED.

One moment in the story (with Batman) seems a little out of place. This could simply be a matter of needing to see the bigger picture, a problem sometimes when looking at a single issue rather than the entire story.

An area the story could have been fleshed out more is seeing other characters close to Damian and Batman. Where are they at this point in time? What is their reaction to what happens? It's understandable that this story is focused on Damian and he deserves the spotlight. With certain events escalating, it'd be nice to see or know what the others are doing about it or what their position is.

Damian is back. Sort of. Ever since we first saw the dark future with Damian as Batman, we've been wanting to see more of what his future holds. With his unfortunate current state in comics, it's nice to be able to escape that and look forward at this story. This is our chance to see Damian in a way we haven't been able to before. Andy Kubert does a great job as the writer and artist in bringing life to this moment. There are some tiny moments of confusion but they should be expanded on in future issues. With a start like this one, it's too bad this is only four issues. Get ready to see Damian like you've never seen him. Bravo to Andy Kubert for delivering such a fun and great looking Damian story. 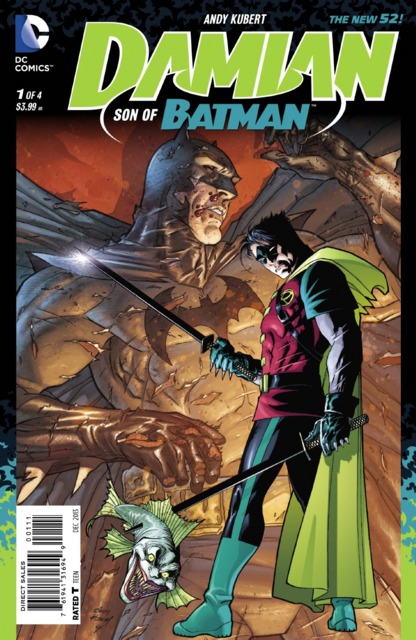