Father and son get some downtime. Unfortunately the looming threat of starvation and death tempers the bonding somewhat.

In a previous review, I remember remarking that young Cyclops and his father Corsair had all these adventures that were glossed over and that the title seemed to be moving at an extremely rushed pace. This issue changes all that. Scott and Papa Summers’ Badoon ship, apparently not known for their lifetime warranties, fails sending them careening into the nearest habitable planet. As a quick aside: I appreciate Greg Rucka’s attention to detail, taking a moment to specifically mention that Corsair had to check for a planet with the correct atmosphere rather than simply crashing on the nearest one and having it work out miraculously. It’s these small things that make this book feel considered and filled out, making their adventure feel more real and it’s the real setting that makes the emotional moments impact with much, much greater force. That’s definitely what the focus of this issue is on: these two finally having a moment to catch their breath and hash out some of the less pleasant things from their shared past. It’s not an action-packed issue where everything is on the line and danger around every corner, though there IS an omnipresent threat of death that comes with being stranded and Corsair’s current situation also gets massively more expounded upon and at least one burning question is answered.

The linework by Russell Dauterman transitions seamlessly from the intense action of the issue’s opening to the mellow, subdued conversations of the book’s later parts and still manages to bring a certain dynamism to the conversational portions of the title. He also makes the planet they wind up on look truly alien with its strange flora and fauna complete with a strangely burning blue flame which is, also, the purview of colorist Chris Sotomayor. The two of them together create a world that I’m anxious to see more of, particularly with their excellent use of body language to communicate subtle emotional nuance. These are characters that could play a poker game and, as long as these artists were drawing it, you’d be able to know who has what kind of hand without looking at the cards.

A large piece of this issue is taken up with some in-depth flashbacks and recaps, and while they’re good at conveying the information and I enjoy the way they’re rendered as well as what they establish, they overstay their welcome. Just barely, but I definitely found that it dragged on a LITTLE too long. Part of this flashback involves Chris revealing the existence, or former existence, of his OTHER son Vulcan, a revelation that Scott couldn’t seem to care less about. They plow right past it and he moves onto his next question with scarcely a single follow-up question.

I was starting to worry that this book was veering away from its central characters and going to focus more on the bizarre, galaxy-spanning adventures but this issue does a great job of grounding the characters, literally and figuratively. While there’s a lot of recap to get through and some odd moments, it’s a good setup for future issues and, while I enjoyed this one a great deal, I’m excited to see where this leads. 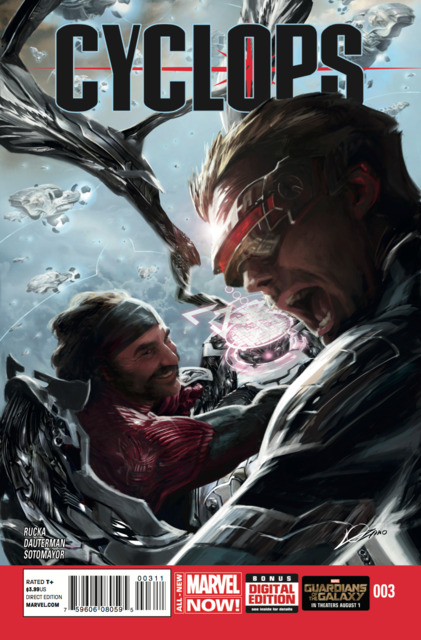