Past Scott Summers is looking to make up for lost time with his awesome SPACE DAD! But dad’s picked up some bad habits from the fringes of space…

The relationship to father to son can be a complicated thing. Throw in some extenuating circumstances like supposed death, spacefaring and time travel and things get downright labyrinthine. There’s no self-help book for “So You’re a Space Pirate and Your Son Travelled to the Future” leaving Cyclops (past flavored) and Corsair to fend for themselves in terms of normal father/son bonding, but Greg Rucka seems more than able to accommodate. I truly do love that young Scott is so willing to just pick up and head out with his father, and it comes off as completely psychologically realistic, and how awkward Christopher Summers is at dealing with his own son, but desperately trying to make the best of his second chance. This is a very road trippy issue, but we get one major development dealing with Papa Summers, one that looks to have some major consequences for the very near future. Rucka does a fantastic job of writing these two, really emphasizing the father/son dynamic, but in a very interesting and different way. Christopher barely knows how to be a father (his sons were lost to him at a relatively young age) and Scott is equal parts hero-worshipping and skeptical, especially when it comes to wielding a sword. He was also old enough to have formed a real bond with real expectations when they were separated. It creates some very genuine, and some very funny moments.

Russell Dauterman’s linework does a great deal of heavy lifting in the emotional attachment department, as well as the casual interest one giving us alien worlds and denizens that look as bizarre as one might expect truly alien beings to look. His action scenes are also worth pointing out, the movements fluid and realistic pacing of the action scenes. The dialog tends to lessen, also a credit to Rucka, and the action takes over when necessary. Chris Sotomayor’s colors bring the strange, wonderful worlds to life as well. His palette is diverse and wondefully strange, striking a tone of incredible brightness and wild colors. The worlds and beings inhabiting them actually look alien, in other words. He gets a lot of small details as well, but the one that stood out the most was, for some reason, Corsair's facial hair and how subtly consistent it was across the many panels he appeared in. It's a small thing to call out, and there are tons of other details, but that one really caught my attention.

I miss the Starjammers. I really do. They’d been relegated to backseat status for much of the last few years, only to return ONLY to now be sidelined after a single issue. We jump ahead in time as this issue begins, and while it isn’t made clear how much time has passed, I feel like we miss out on not only the adventures they had, but the earliest parts of their bonding. The issue doesn’t indicate how much time has passed, and I’m sure there are more great moments to come, but it still feels like an odd choice.

Lost time aside, seeing such an interesting story that previously only would’ve been possible in the pages of “What if…?” is, so far, a ton of fun. Corsair’s written with the perfect balance of roguish charm and Scott’s doing his best to look knowledgeable, but is still incredibly inquisitive and in awe of all the strange, new sights and sounds. There’s certainly a dark undercurrent to the whole thing, but this is overall a very bright and happy issue in a very witty, happy title. 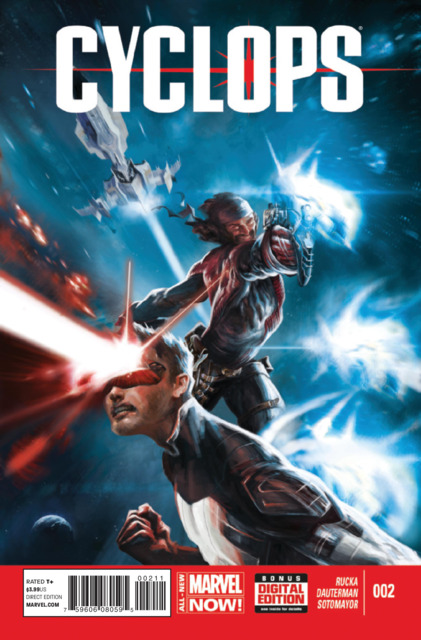