This isn’t the Cyclops you know. With the younger version reunited with his father, in space, there’s no telling where they’ll go or how this will change the character.

Cyclops is a great character. He’s a great leader and is dedicated to his team and mutants around the world. Sometimes he can be a little stiff or two-dimensional. When Brian Michael Bendis brought the original X-Men from the past into the present, we found ourselves with two different versions of most of the characters. For a character like young Cyclops to see his future and what he’s become, even if you’re on the “Cyclops was right” side, it can be a lot to take in. Now young Cyclops has discovered his father, Corsair, thought to be dead, is alive and is a space pirate, how could he resist wanting to spend time with him.

By taking young Cyclops out of the familiar X-Men setting, as we've seen the first time around, and putting him in space, there's no telling what we'll see. This experience, and getting to know his father during these younger years, could shape him into a different person. It's both scary and fascinating to think about how all of these experiences could blow up the entire time stream. At the least, it could change who Cyclops grows up into.

Greg Rucka does a great job in filling newer readers on what's going on. It's a pretty convoluted bit of backstory but Rucka lays it all out with ease and also gives readers a taste of who the rest of the Starjammers are.

Russell Dauterman's art is phenomenal. As a relative newcomer to comics, he's someone to keep an eye on. His recent (but brief) stint on NIGHTWING immediately caught our attention. It's going to be a blast to see what Dauterman will have to draw in this series.

This was a great starting point for a new series but it almost feels like a prologue with the rest of the series going in a slightly different direction. Will the series focus on Cyclops with the Starjammers or more on just Cyclops and his father? Rucka touches on it a little here but it still seems a little out of character for Cyclops to run away from the rest of his team. But you can't blame him for everything he's seen and experienced lately.

I know we shouldn't think about it but you have to wonder how long the young X-Men can stay in the present. It's a small distraction despite how much fun it is seeing them here.

Cyclops finally has his own ongoing series. Only this isn't quite the Cyclops we know. When the young original X-Men were brought to the present, we've had chance to see these characters slowly start to evolve differently. The idea of a sixteen-year-old Cyclops having adventures out in space with his father is pretty far out and is bound to have an affect on him. Russell Dauterman's art is perfect for the series and I can't wait to see what Greg Rucka throws at him in future issues. Whether you love Cyclops or not, this is a series to check out to find out who this Cyclops will become. Marvel is on fire with their recent new solo titles focusing on individual characters. It's a great time to be a comic fan. It's just a little hard on the wallet. 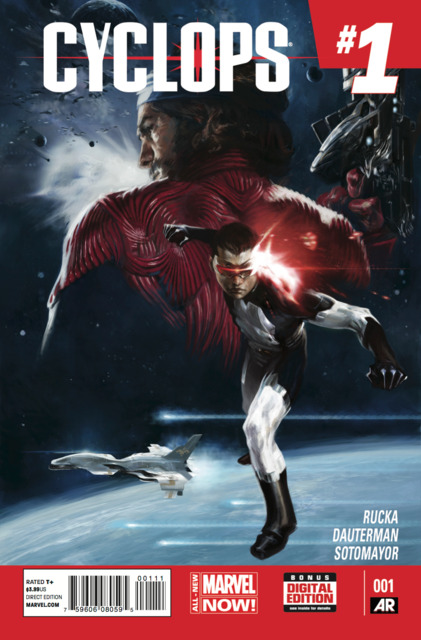