As Cyborg takes some time to figure out what's caused the changes in his body, he'll soon discover there's way more going on.

Even though this is the second issue, it's still hard to believe we actually have an ongoing CYBORG series. It's been long overdue, especially considering Victor Stone's place in the Justice League in the New 52. Cyborg isn't quite the man he used to be. He may be used to going through drastic changes but his recent advancements have even him perplexed.

Returning home to Detroit in order to spend some time exploring the changes with some of S.T.A.R. Labs' resources, we get some insight into what makes him tick. It's not often, in other books, we get to hear his inner monologue of thoughts. It's easy to take for granted what he must be going through. We're used to characters going through big changes to become heroes. Seeing what he thinks of his situation is fascinating.

The series isn't just about Cyborg getting in touch with his feelings. We do have the upcoming alien invasion coming up along with some individuals from "Someplace Else." It's clearly a matter of wait and see but there is a tiny bit of confusion as we try to figure out who these new players are and how they'll fit into upcoming issues. We also have the subplot of unsanctioned cybernetic implants being big business in Detroit. It feels a little coincidental but the idea makes perfect sense. We often have to look the other way when we see characters with or inventing incredibly advanced items that could benefit mankind but they end up being limited to just the heroes' adventures.

David Walker is really fleshing out who Cyborg is. It's exciting to hear what he's thinking about his current situation and the changes he's going through. We're seeing him establish his own territory apart from the Justice League and there's definitely a big threat headed his way, giving him his own enemies. Ivan Reis' pencils are always a joy to see. The inks and the colors adds to Reis' stellar art. It would be nice to know more about the characters in the vague "Someplace Else" but it's a building point for the plot and we just have to be patient. CYBORG is off to a great start. This is the book Cyborg and Cyborg fans have been waiting for. 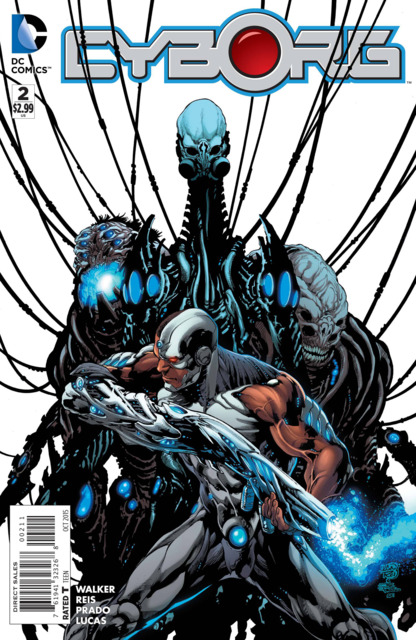