What would drive a person to hunt down a deadly and murderous creature? Find out just how far a person is willing to go.

It's always amazing how every once in a while a brand new comic can sneak up on you and deliver a nice surprise. That is what CURSE has done.

CURSE focuses on Laney Griffin, a dedicated father in a bad situation. We've seen stories before about how far someone will go for family but Laney's story is a little different. He has a bigger problem to deal with and you immediately feel for his character. This isn't a story about a man driven by revenge. It's a father fighting for the most important thing he can, his son's life.

The crux of the story is there is a killer loose in the area. It's no ordinary killer as several victims have been found and they have been brutally slashed to pieces. In case you didn't read the solicit information, we're talking about a werewolf here. It's not your typical rendition as Michael Moreci and Tim Daniel add a darker feel to the genre. Seeing what the killer can do makes Laney's story more crazy.

Moreci and Daniel start the issue off with a confrontation. We're thrown into the aftermath of the action. It then shifts to filling us in on who Laney is and what motivates him. This storytelling techniques works well here and almost catches you off guard.

The art is handled by Riley Rossmo and Colin Lorimer. Their styles are pretty distinct and it's cool how they manage to mesh the two together. Multiple artists on a single issue usually drives me nuts but it works wonderfully here.

Given that this is a four-issue miniseries, you can feel the story moving fairly quickly. Laney is on the hunt and the confrontation almost happens too suddenly and conveniently. There is a bounty on the killer and Laney, a former football hero, seemingly finds him with ease. It is mentioned he's been at this before the night in question but it feels too fast and easy.

This issue does have a hook but there doesn't seem to be much further it can go. Obviously that can't be the case. This could be even more of a reason to pick up the next issue to see how the rest will play out. Are there even more layers to this story than we can see so far?

Picking up a new series or miniseries is often a gamble. There are many books on sale but it's worth it to take a risk from time to time. CURSE may be a horror-type story dealing with a man hunting a killer but there is more to it than that. You find yourself caring about the main character and you'll want to see if he can succeed on his mission. With the way things go in this first issue, you can't help but wonder what else is coming up. Michael Moreci and Tim Daniel set up the series nicely and the art by Riley Rossmo and Colin Lorimer is a cool combination. CURSE was a nice surprise and it's great to see new and original stories still hitting the shelves. 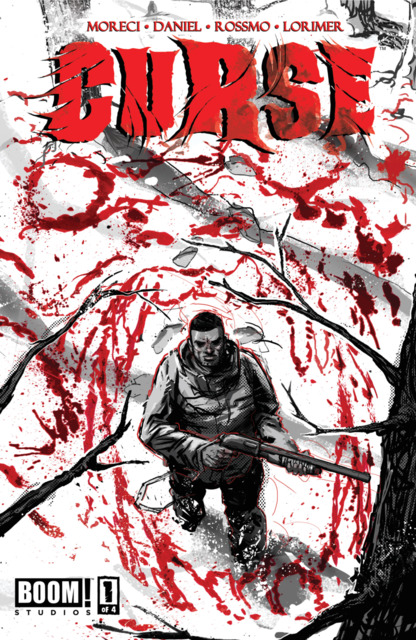